Nawaz Sharif, his daughter and son-in-law arrived in Lahore, on a special plane, where they received a rousing welcome from thousands of party supporters. 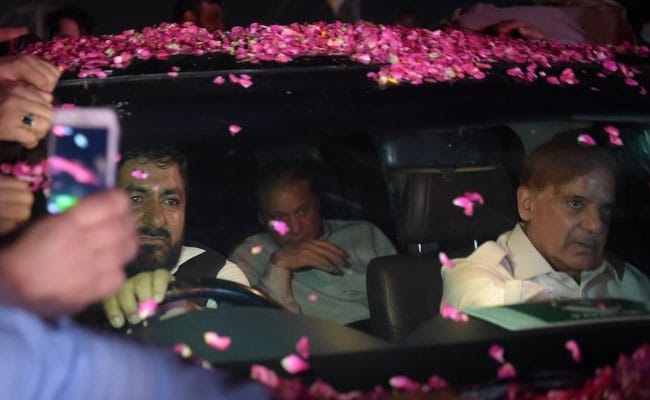 Ousted Pakistan prime minister Nawaz Sharif, his daughter Maryam and son-in-law were released from prison on Wednesday, hours after a top court suspended their sentences in a major corruption case that wrecked their political career.

In a relief to the Sharif family which is still grieving from the death of Nawaz's wife Begum Kulsoom, a two-judge bench of the Islamabad High Court suspended the jail sentences of the embattled former prime minister Sharif, his daughter Maryam and son-in-law Capt (retd) Muhammad Safdar in the Avenfield corruption case and ordered their release.

Sharif's younger brother and President of his Pakistan Muslim League-Nawaz (PML-N) Shehbaz Sharif and other party leaders met the former premier at the high-security Adiala Prison before he was released, Geo News reported.

Shehbaz, along with party leaders, met Nawaz in the office of the jail superintendent.

During the meeting, Nawaz Sharif said, "I have not done anything wrong; my conscience is satisfied."

Nawaz Sharif told party leaders that Almighty Allah favours what is right and just. "Allah will grant justice to me," he said.

The former three-time premier, his daughter and son-in-law were taken to the Noor Khan Airbase amidst tight security. They arrived in Lahore, the bastion of the Sharif family, on a special plane, where the trio received a rousing welcome from thousands of party supporters.

Earlier, a two-judge bench of the Islamabad High Court heard the petitions filed by Sharif, Maryam and Safdar challenging their conviction related to the purchase of four luxury flats in London through corrupt practices.

"The instant writ petition is allowed and sentence awarded to the petitioners by the accountability court shall remain suspended till the final adjudication of the appeal filed by the petitioner," reads the judgment.

A date will now be fixed for the hearing of the appeals.

The accountability court judge Mohammad Bashir had sentenced the trio on July 6.

Nawaz Sharif, 68, Maryam, 44, and Safdar, 54, were sentenced to 10 years, seven years and one year, respectively, in prison and fined in the Avenfield properties case.

The accused were also disqualified to contest elections or to hold public office for a period of 10 years after release. Both Maryam and Safdar are politicians. The accountability court verdict had ruined their political career.

Following the accountability court's judgment, the Sharifs filed separate petitions requesting the high court to suspend sentences and set aside the verdict.

The ruling by the Islamabad High Court comes just a week after Sharif's wife, Kulsoom Nawaz, died from cancer in London.

The trio were briefly allowed out of the high-security Adiala Jail on parole to attend her funeral. They returned to jail on Monday.

The two-judge bench also ordered the release of the former premier, his daughter and son-in-law from the Adiala jail in Rawalpindi.

Sharif, Maryam and Safdar were also directed to submit bail bonds worth Rs 500,000.

According to jail officials, Nawaz, Maryam and Safdar will be released on Wednesday if the order is received prior to the expiration of lock-up time.

Quoting sources, Geo News reported that if the former premier, his daughter and son-in-law are released, they will be taken to Lahore via a special flight.

Pakistani media reported that the verdict would remain a temporary relief for the former prime minister and his family members until the court gives the final decision on their application seeking suspension of their conviction in the  Avenfield case.

Apart from the Avenfield case, the Sharifs face jail terms if they are convicted in two more corruption cases  related to Al-Azizia and Flagship cases.

The cases against the family stemmed from Panama Papers case in April 2016.

In a blow to Pakistan's anti-corruption watchdog, the Islamabad High Court also dismissed the National Accountability Bureau's request to first announce a judgment on the maintainability of the pleas. The bench also imposed a fine on the NAB lawyers earlier for using delaying tactics.

The NAB was also pulled up by the Supreme Court on Monday when it rejected its petition challenging the IHC's decision to hear Sharifs' petitions against the Avenfield verdict.

Chief Justice Saqib Nisar termed the NAB petition as frivolous and imposed a Rs 20,000 fine on the anti-corruption watchdog.

Sharif resigned as Pakistan prime minister last year after the Supreme Court disqualified him from holding public office and ruled that graft cases be filed against the beleaguered leader and his children over the Panama Papers scandal.

The Avenfield case was among the three corruption cases filed against the three-time former premier and his children by the NAB on the Supreme Court's orders in the Panama Papers case which disqualified Sharif.

Sharif has denied any wrongdoing and says the charges are political motivated.

His supporters believe the real reason he was convicted was because he had fallen out with the country's powerful army.

Leader of the Opposition and Sharif's younger brother, Shahbaz, following the verdict, tweeted a Quranic verse to express gratitude on suspension of the sentences.

"Truth has come, and falsehood has departed. Indeed is falsehood, [by nature], ever bound to depart," he tweeted.