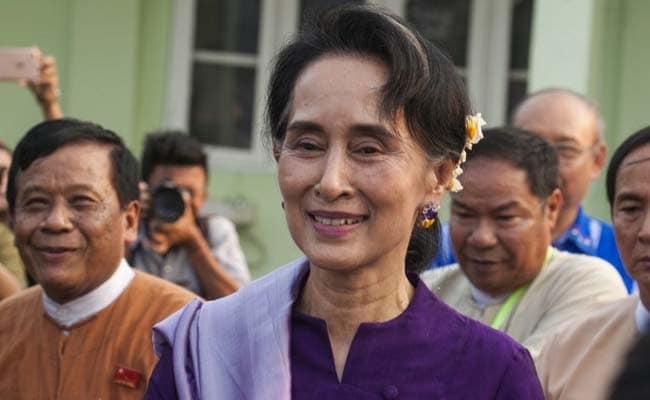 Naypyitaw: Myanmar's de facto leader, Aung San Suu Kyi, has made clear to foreign diplomats: It doesn't matter if they call her country Myanmar, or its old name, Burma.

Suu Kyi gave her position Friday in a speech to the foreign diplomatic corps. She is the government's de facto leader in the specially created post of state counsellor, and also is foreign minister. Her National League for Democracy party took power from an army-backed government at the end of March.

Democracy supporters in Burma balked when the then-ruling military renamed the country Myanmar in 1989. The military in turn was irritated when activists and their supporters abroad - including many Western governments - insisted on sticking with the old name.

As she explained her policy of friendship and mutual benefit to the diplomats, Suu Kyi interrupted herself to say she should clear up the matter of what name to use for her country "because there are some members of the diplomatic corps who don't know quite which term to use."

"So it is up to you, because there is nothing in the constitution of our country that says that you must use any term in particular," she said. "I use Burma very often because I am used to using it. But it does not mean that I require other people to do that as well.

"And I'll make an effort to say Myanmar from time to time so you all feel comfortable," she told her audibly amused audience. "This is what diplomacy, I think, is all about. We have to learn to accommodate each other."

The generals changed the country's name as a nationalistic gesture, spurning the name that was handed down from when the country was a British colony.

The military sought to boost its patriotic credentials a year after its bloody suppression of mass pro-democracy demonstrations in 1988. It also changed the style of many place names, including the then-capital, Rangoon, which became Yangon.

Its opponents sought to deny the army regime's legitimacy by rejecting the name changes.

It was an argument fought mostly on the international stage, since the country's name remained the same in the national language, and the English versions, Burma and Myanmar, both derive from the same Burmese word.

Suu Kyi is the country's most popular political figure but was unable to become president because of a clause in the military-imposed constitution that bars anyone with a foreign spouse or child from holding the job. Her two sons are British, as was her late husband.

(This story has not been edited by NDTV staff and is auto-generated from a syndicated feed.)
Comments
Aung San Suu KyiMyanmar Or Burma