Liz Truss "was not wrong to want to improve growth in this country. It is a noble aim. And I admired her restlessness to create change. But some mistakes were made," Rishi Sunak said 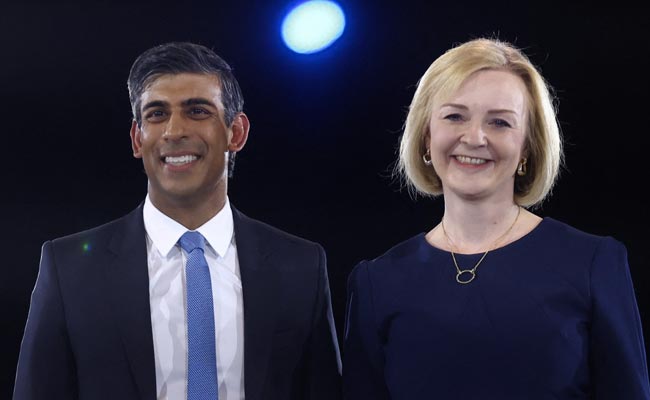 New UK Prime Minister Rishi Sunak, among the first to pick holes in predecessor Liz Truss's economic plan, said today that while she made "mistakes", he admired her "restlessness to create changes". Ms Truss's plan -- based on massive unfunded tax cuts -- ultimately saw her out of office just 49 days after she took over.

In his first address to the people as the Prime Minister, Mr Sunak spoke of the "profound" economic crisis that the country is facing. " The aftermath of Covid still lingers. Putin's (Russian president Vladimir Putin) war destabilised supply chains..." he said.

"I want to pay tribute to my predecessor, Liz Truss. She was not wrong to want to improve growth in this country. It is a noble aim. And I admired her restlessness to create change. But some mistakes were made. Not born of ill will, or bad intentions. Quite the opposite, in fact, but mistakes nonetheless. And I have been elected as a leader of my party and your Prime Minister, in part, to fix them. And that work begins immediately," Rishi Sunak said.

Liz Truss had quit the top post after her plan for a mini-budget spooked the markets. "Given the situation, I cannot carry out the mandate for which I was elected," she had told the media.

During the contest for leadership earlier this year, Rishi Sunak had criticised Liz Truss's tax-cutting agenda. He said he would cut taxes only after bringing inflation under control. He had also outlined a plan to cut income tax from 20 per cent to 16 per cent by 2029.

In his address today, he said  he would "place economic stability and competence at the heart of this government's agenda".

While leaving 10 Downing Street, the official residence of the UK Prime Minister, Ms Truss had wished Mr Sunak "every success" and said she remained "more convinced than ever" that Britain needed to be "bold" in confronting the challenges it faced.

Mr Sunak faces the challenge of not only devising a solution to the economic crisis, but also getting it approved by his Conservative Party, which remains deeply divided on key questions like higher taxes, tax cuts and spending.

Higher taxes are likely to be strongly opposed by a section in the party. Others will oppose spending cuts in key areas like health and defence.

In his address today, Mr Sunak also had words of praise for former Prime Minister Boris Johnson. He said he would always be grateful to Boris Johnson for his "incredible achievements" as Prime Minister and treasure his warmth and generosity of spirit.

US, Germany Likely To Send Tanks To Ukraine In Potential War Turning Point