Pompeo has been tasked with negotiating a plan that Washington hopes would involve Kim declaring the extent of nuclear program and a timeline for its dismantling. 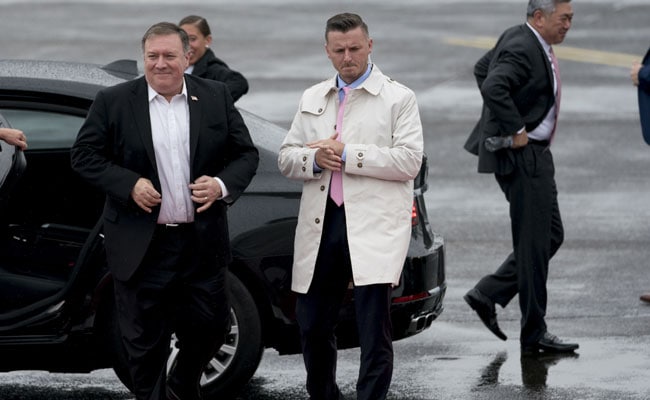 The top US diplomat arrived with senior aides in Pyongyang Friday morning.

Since meeting Kim in Singapore last month Trump has been bullish about hopes for peace, boasting that the threat of nuclear war is over.

But the statement the leaders signed was short on clear commitments.

Kim agreed to the "complete denuclearisation of the Korean Peninsula" -- a stock phrase favoured by Pyongyang that stopped short of longstanding US demands for North Korea to give up its atomic arsenal in a "verifiable" and "irreversible" way.

Pompeo has been tasked with negotiating a plan that Washington hopes would involve Kim declaring the extent of his nuclear weapons program and agreeing a timetable for it to be dismantled.

"Our leaders made commitments at the Singapore summit on the complete denuclearisation of North Korea," Pompeo had earlier told reporters travelling with him on a journey that included a stop at Yokota, a US airbase in Japan.

"On this trip I'm seeking to fill in some details on those commitments and continue the momentum toward implementation of what the two leaders promised each other and the world," he said.

"I expect that the DPRK is ready to do the same," he added, using the initials of North Korea's official name.

The top US diplomat, who arrived with senior aides in Pyongyang Friday morning, is to stay overnight in the North Korean capital for the first time.

In a tweet the Secretary of State said he was "looking forward to continuing our work toward the final, fully verified denuclearisation of #DPRK, as agreed to by Chairman Kim".

Washington hopes that "complete" denuclearisation can begin within a year, but many expert observers and Trump critics warn that Kim's summit promise meant little and the process could take years -- if it ever starts.

In the meantime, Pompeo and Trump have vowed to keep in place the international economic sanctions that they believe forced the North to the negotiating table in the first place.

The US delegation was set to have lunch with Kim Yong Chol, a senior North Korean official and former spy master, on arrival in Pyongyang.

After talks late Friday and early Saturday in the capital, Pompeo is due to fly on to Tokyo to brief his Japanese and South Korean counterparts.

His round-the-world diplomatic voyage will then take him on to Vietnam and Abu Dhabi before he arrives in the Belgian capital Brussels to rejoin Trump for next week's NATO summit.