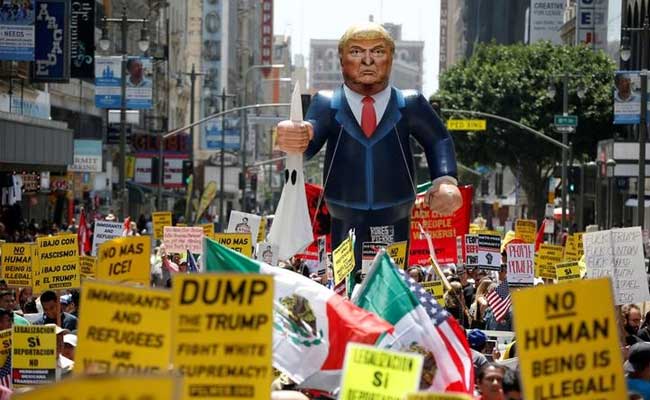 People march with an inflatable effigy of Republican presidential candidate Donald Trump during an immigrant rights May Day rally in Los Angeles, California, US, on May 1, 2016. (Reuters)

Los Angeles: Hundreds of people marched through Los Angeles on Sunday in a May Day rally that took aim at Republican presidential front-runner Donald Trump for his anti-illegal immigration platform that includes building a wall along the US border with Mexico.

The demonstration in America's second most populous city, which has a large immigrant population, came just days after protesters smashed the window of a police car and blocked traffic outside a Trump campaign event in Costa Mesa, California, 40 miles (64 km) southeast of Los Angeles.

On Friday, demonstrators blocked the entrance of a hotel hosting the California Republican convention in Burlingame, south of San Francisco, forcing Trump to halt his motorcade and go through a back entrance to deliver his speech.

The rally in Los Angeles remained peaceful and drew smaller crowds than some past May Day demonstrations in the city, with several hundred people marching through downtown at one point but largely dispersing by midafternoon.

Members of the crowd carried a large blow-up effigy of Trump holding a Ku Klux Klan hood, along with signs that read: "Dump Trump."

"He's threatened that should he become president of the United States, in his first 18 months in office, he fully intends to deport all 11 million-plus undocumented persons in the United States. We don't take that lightly," said Juan Jose Gutierrez, of the Full Rights for Immigrants Coalition.

Others waved Mexican or US flags or signs that called for immigration reform and an end to deportations.

A Los Angeles Police Department spokeswoman said no arrests were made and there were no reports of violence.

Protests have become common outside rallies for Trump, 69, the New York billionaire businessman. He has aroused criticism for his pledge to deport illegal immigrants, even as it helped propel him in the race for the Republican nomination for the November 8 election to succeed Democratic President Barack Obama.

He has accused Mexico of sending drug dealers and rapists to the United States and has promised to build a wall along the southern border and make Mexico pay for it.

Trump said on Sunday he will have essentially sealed the Republican nomination if he wins Tuesday's contest in Indiana, where he holds a big lead over chief rival Ted Cruz, a US senator from Texas.