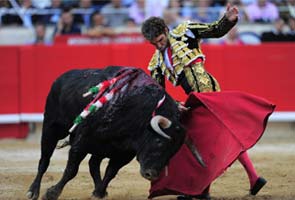 Barcelona, Spain: Matadors have driven the killing sword into bulls for the last time in Spain's powerful northeastern region of Catalonia in an emotive farewell fight before a regional ban on the country's emblematic tradition takes effect.

Many fans then invaded the ring to grab handfuls of sand to keep as souvenirs.

The bullfighters were later carried shoulder high from the ring into the streets outside the bullring while the crowd chanted slogans in favor of freedom and against the prohibition. A brief bout of scuffling broke out as fans confronted about 20 animal welfare activists, but there were no reports of injuries or arrests.

The fight was also preceded by moments of tension as pro- and anti-bullfighting activists exchanged insults.

Catalonia's Parliament banned bullfighting in July 2010 following a signature-collection campaign by animal rights activists. The ban does not take effect until January 1, but Sunday's fight was the last scheduled this season.

Critics say the prohibition is less about animal welfare and more a snub to Spain by independence-minded Catalans.

Bullfighting's popularity in Catalonia has plunged in recent decades and the Monumental was its last functioning ring, although the city once boasted three.

Hours before the fight, a small group of anti-bullfight activists gathered outside the arena, celebrating with sparkling wine.

"Obviously a lot of political parties have tried to politicize this, but we mustn't forget that this popular proposal sprouted from a pure pro-animal rights standpoint aimed at eradicating animal cruelty," campaigner Soraya Gaston said.

"It looks like this may be the last day (of bullfights in Catalonia). But the last word hasn't been said yet," fan Eduardo Edurna said. "I think we will have bullfighting back in Catalonia."

The prohibition caused a furor and triggered a nationwide debate over the centuries-old spectacle that inspired such artists and writers as Goya, Picasso and Hemingway.

"Banning bullfighting in Catalonia is nothing more than an attack on liberty," said Carlos Nunez, president of Spain's Mesa del Toro pro-bullfighting umbrella group. "It's the fruit of policies in Catalonia against bullfighting and all that is seen to represent Spain."

Although mostly symbolic - the Monumental staged only some 15 fights a year - the prohibition sent bullfighting supporters frantically looking for ways to overturn the decision or at least make sure it doesn't spread to other regions.

Spain's leading conservative opposition Popular Party - tipped to win general elections in November - has appealed the ban before the Constitutional Court, while its Catalan branch is battling for a delay in the implementation of the ban.

Meanwhile, the Mesa del Toro is seeking 500,000 signatures in the hope it can persuade the Madrid national parliament to grant bullfighting cultural heritage status.

"It's like a crack has developed in the armor plating (of bullfighting). It's a small crack but the protective shield might crumble altogether," said Leonardo Anselmi, a key promoter of the Catalan prohibition.
Catalonia is the second of Spain's 17 regions to ban bullfighting. The Canary Islands outlawed the practice in 1991 although it had never been a popular tradition there.

For the moment, however, there are no signs any other Spanish region will follow suit.

The practice was once immensely popular in Barcelona and other Catalan towns but its decline began with the end of the dictatorship of Francisco Franco in 1978 and the subsequent rise in Catalan nationalism and a rejection of things deemed Spanish.

But critics say the hypocrisy of banning bullfighting in the name of animal rights was shown up when months after the ban, Catalonia passed other legislation protecting the "correbous," a typical Catalan town festival event in which flaming balls of wax or fireworks are attached to the horns of bulls which are then taunted and teased by rowdy crowds in bullrings or town squares.

Spain's ancient fascination with bulls, and with using the animals as a test of bravery, is still very much a part of the national identity. Bullfights and related events, such as the annual San Fermin Pamplona bull-runs, make up a multimillion-dollar industry and draw many tourists.

But modern times and the economic crisis have nevertheless hit the tradition hard and surveys consistently show most Spaniards have no interest in bullfighting.

In an article headlined "The Fiesta is Ending," leading newspaper El Pais highlighted that changing tastes and economic difficulties, particularly in small towns, have led to a 34 percent drop in the number of bull-related festival events from 2,622 to 1,724 between 2007 and 2010.

Promoted
Listen to the latest songs, only on JioSaavn.com
In January, Spain's leading broadcaster said it would no longer show live bullfights in order to protect children from viewing violence.