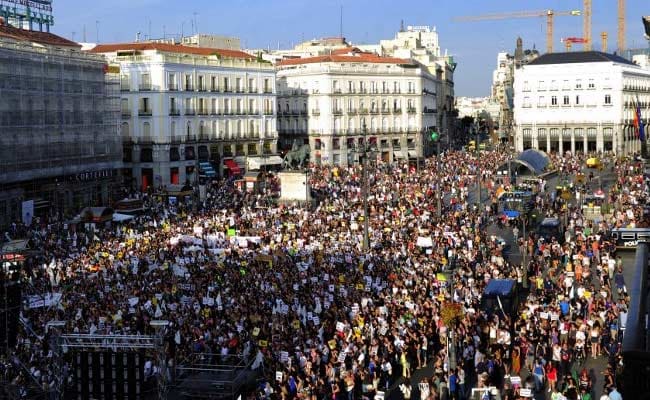 Thousands of people gather to demonstrate against bullfighting in Spain, in Madrid. (AFP)

Madrid: Thousands of Spaniards took to the streets of Madrid on Saturday to demand an end to the centuries-old but controversial tradition of bullfighting.

The protest came after the anti-bullfighting lobby successfully managed to obtain a ban on a famous festival which ended with a bull being speared to death.

The regional government of Castilla y Leon in June banned the killing of bulls at town festivals, in a move that targeted the northern region's controversial Toro de la Vega festival where horsemen chase a bull and spear it in front of onlookers.

A spokesman for the Party Against the Ill-Treatment of Animals (PACMA) said it was "time to end bullfighting and all other bloody spectacles".

"Bulls feel and they suffer," said Chelo Martin Pozo, a 39-year-old from Seville who had come to Madrid for the rally.

"Bullfights are a national shame and if they represent me, then I am not Spanish," she said.

Madrid resident Azucena Perez marched outside the parliament holding up a banner saying: "Bullfighting and the Bourbons should be im museums," referring to the country's royal family.

"I think our laws should prohibit the torture of animals as a form of entertainment," the 36-year-old said, admitting, however, that her grandfather was a big fan of the corrida.

Spain's first pro-bullfight lobbying group, the Bull Foundation, made up of breeders, matadors and aficionados, was set up last year.

A number of protest rallies in favour of the controversial past-time have been held recently, such as one in the eastern city of Valencia, a major bullfighting city, which drew thousands of people in March.

Leading Spanish daily El Pais this week said that events involving bulls that 1,736 bullfights had been staged in the country last year, or 132 less than in 2014.

Promoted
Listen to the latest songs, only on JioSaavn.com
Supporters of bullfighting, known as "aficionados", are not giving up without a struggle.

They see bullfighting as an art that is an integral part of Spanish culture, like flamenco.
Comments
Bullfighting protestsSpain bullfightingSpain protests