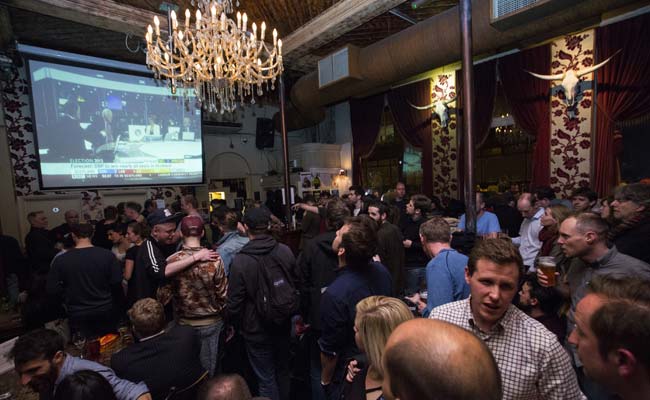 A pub in North London holds a general election results party on May 8, 2015. (AFP)

Shouts of "Hooray!" were let out as the surprise projections were announced on television screens at the pub in the City of London, a tightly-packed district of skyscrapers that is traditionally a key source of support and donors for the party.

"Why would you change? The economy is doing well after five years with the Conservatives," said Grant, referencing what has been a solid economic recovery since 2010.

Financial markets appeared to concur, with the pound rallying to its highest level since late February in Asian trading.

Heading into the election, the International Monetary Fund forecast solid economic growth for Britain for this year and next, at 2.7 per cent and 2.3 per cent respectively, but official data has shown that the country's economy is on course to grow slower than expected in the first three months of 2015.

In the City of London, however, the Conservatives' stewardship of the economy appeared to be their trump card over the main opposition Labour party.

"I voted for the Conservatives because Labour is not competent on financial matters," said Ben Woodthorpe, 39, as he sipped a beer in the Draft House, a bar in the heart of the financial quarter.

Cameron would extend an austerity drive borne out of the 2008 global financial crisis, with the Conservatives vowing to bring the budget of the world's fifth-biggest economy back to balance.

Early results on the night confounded polls throughout the campaign that showed Labour virtually tied with the Conservatives, and while the Conservatives do not look to have a clear majority in the House of Commons, they are in a strong position to remain in power.

"Absolute delight," was how Alexandra Paterson, National Chairman of Conservative Future, summed up her feelings at a central London party for the Young Conservatives group, where around 100 activists gathered in a sports bar to watch the results come in.

"British people voted for competence," she added. "I am absolutely thrilled, it's wonderful news, it's really what this country needs."

"I think the general mood is one of real encouragement," Jackson said. "When people saw those exit polls, I think it really lightened up the mood, you could see people, visibly were a lot more excited."

The mood among Labour supporters, by contrast, was glum.

One pro-Labour youth group which had organised a gathering at the Lexington, a packed and lively pub in the Islington district of north London, preferred to sip their drinks without discussing their reaction with journalists.

But other Labour activists such as 28-year-old John McKee, a charity worker, held on to the hope that the final results would not be as brutal for his party as feared.

"The outcome will be bad but not as bad as shown in the first exit polls," McKee said. "The outcome could be a very unstable Conservative government or, why not, an unstable Labour government."

Promoted
Listen to the latest songs, only on JioSaavn.com
Labour party supporter Nick Mabey said it was the advance of the pro-independence Scottish National Party (SNP) north of the border, wiping out Labour in traditional strongholds, that had most damaged his party.

"I am very disappointed because it looks like the majority is going towards the Conservative side," Mabey said. "Labour has been screwed by what happened in Scotland."