Lion Air Jet Should Have Been Grounded Before Fatal Flight: Officials

The Boeing 737 MAX vanished from radar about 13 minutes after taking off from Jakarta on October 29, slamming into the Java Sea moments after it had asked to return to the capital. 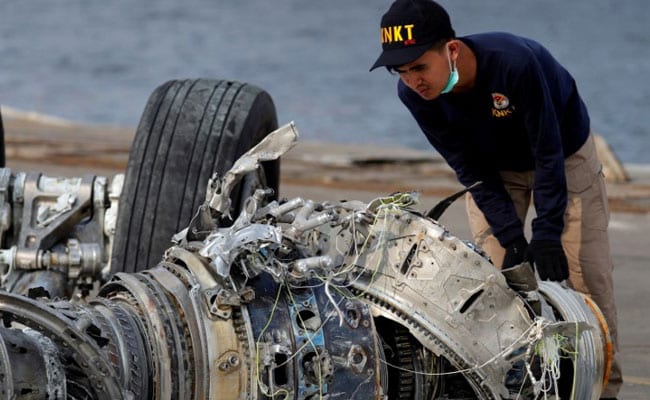 A Lion Air jet that crashed last month should have been grounded over a recurrent technical problem and never permitted to make the fatal flight, Indonesian authorities said Wednesday in a report that took aim at the carrier's poor safety culture.

The Boeing 737 MAX vanished from radar about 13 minutes after taking off from Jakarta on October 29, slamming into the Java Sea moments after it had asked to return to the capital.

The preliminary crash report from Indonesia's transport safety agency did not pinpoint a definitive cause of the accident, which killed all 189 people on board, with a final report not likely to be filed until next year.

But investigators said that Lion Air kept putting the plane back into service despite repeatedly failing to fix a problem with the airspeed indicator in the days leading up to the fatal flight.

Its second last flight was from Denpasar in Bali to Jakarta.

"During (that) flight, the plane was experiencing a technical problem but the pilot decided to continue," Nurcahyo Utomo, aviation head at the National Transport Safety Committee, told reporters.

"The plane was no longer airworthy and it should not have kept" flying, he added.

The findings will heighten concerns there were problems with key systems in one of the world's newest and most advanced commercial passenger planes.

Investigators have previously said the doomed aircraft had problems with its airspeed indicator and angle of attack (AOA) sensors, prompting Boeing to issue a special bulletin telling operators what to do when they face the same situation.

The report confirmed that initial finding, saying the plane's data recorder detected an issue with the AoA.

It also said the plane's "stick shaker" -- the steering-wheel like handles in front of the pilots that vibrates to warn of a system malfunction -- was "activated and continued for most of the fight."

An AOA sensor provides data about the angle at which air is passing over the wings and tells pilots how much lift a plane is getting. The information can be critical in preventing an aircraft from stalling.

The Indonesian National Transportation Safety Committee has retrieved one of the plane's black boxes -- the flight data recorder -- but is yet to locate the cockpit voice recorder.

Lion must take steps "to improve the safety culture" and ensure "all the operation documents are properly filled and documented", the transport agency said.

Despite a dubious safety record and an avalanche of complaints over shoddy service, the budget carrier's parent Lion Air Group, which also operates Batik Air and Wings Air, has captured half the domestic market in less than 20 years of operation to become Southeast Asia's biggest airline.

Indonesia's aviation safety record has improved since its airlines, including national carrier Garuda, were subject to years-long bans from US and European airspace for safety violations, although the country has still recorded 40 fatal accidents over the past 15 years.

The report stopped short of making any recommendations to Boeing but the US planemaker has come under fire for possible glitches on the 737 MAX -- which entered service just last year.

The APA, a US airline pilots union, said that carriers and pilots had not been informed by Boeing of certain changes in the aircraft control system installed on the new MAX variants of the 737.

"I am really surprised if Boeing has not shared all the flight performance parameters with pilots, unions, and training organisations," University of Leeds aviation expert Stephen Wright told AFP before the report was released, adding that "a deliberate omission would have serious legal ramifications"

Several relatives of the crash victims have already filed lawsuits against Boeing, including the family of a young doctor who was to have married his high school sweetheart this month.

Lion Air Flight JT610 plunged into the sea less than half an hour after taking off on a routine flight to Pangkal Pinang city.

Authorities have called off the grim task of identifying victims of the crash, with 125 passengers officially recognised after testing on human remains that filled some 200 body bags.

(Except for the headline, this story has not been edited by NDTV staff and is published from a syndicated feed.)
Comments
Lion AirLion Air plane crash