The blast sparked by the gradual collapse of the volcano's crater was equivalent to a 5.3 magnitude earthquake. 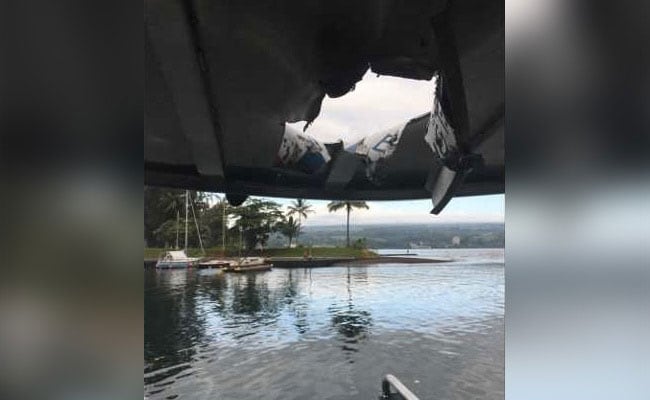 Collapse explosions at Kilauea's crater, named Halemaumau, are happening every 30 to 35 hours (File)

A "collapse explosion" at the summit of Hawaii's Kilauea volcano on Wednesday sent a surge of lava that destroyed structures in an evacuated housing development, geologists and civil defense authorities said.

The blast sparked by the gradual collapse of the volcano's crater was equivalent to a 5.3 magnitude earthquake and caused lava to burst from a fissure 25 miles (40 km) east, destroying at least one home in Leilani Estates, the U.S. Geological Survey (USGS) and Hawaii County Civil Defense said.

These lava surges on Hawaii's Big Island have become an increased concern during the volcano's 11-week eruption, which has destroyed some 712 homes but so far claimed no lives, according to the County of Hawaii.

A massive explosion on Monday caused by molten rock flowing into the ocean sent a "lava bomb" through the roof of a tour boat, injuring 23 people.

Geologists say such explosions may be due, in part, to large volumes of lava rapidly flowing into the Pacific Ocean.

Collapse explosions at Kilauea's crater, named Halemaumau, are happening every 30 to 35 hours as Kilauea's summit subsides, like a balloon slowly losing air, and its lava reservoir drains east underground before bursting from a fissure and flowing to the ocean, according to the USGS.

Thousands of residents have been evacuated as lava has covered 12.5 square miles (32 square kilometers) of farmland, jungle and housing developments, based on USGS data.

The Big Island has grown by about 700 acres (283 hectares), the size of around 400 soccer fields, as lava enters the sea. It briefly formed a small island last week.

Lava was within 0.4 miles (700 meters) of the Isaac Hale Park boat ramp in the Pohoiki community on Wednesday, the USGS said. Locals traveled there by boat in what they expected would be their last visit before it was destroyed by lava, according to a Facebook post on Wednesday by boat captain Ikaika Marzo.

Since Monday's tour boat incident, pressure has increased on authorities to create a viewing area on land for the island's booming lava tourism business.

"The County would have to be certain that the area was safe for visitors, and no such area has been found yet, amid this changing situation," said Snyder.