The Hawaii County Civil Defense Agency said that of the 23 injured, four were taken by ambulances to the hospital, including a 20-year-old woman who was seriously injured after fracturing her femur bone. 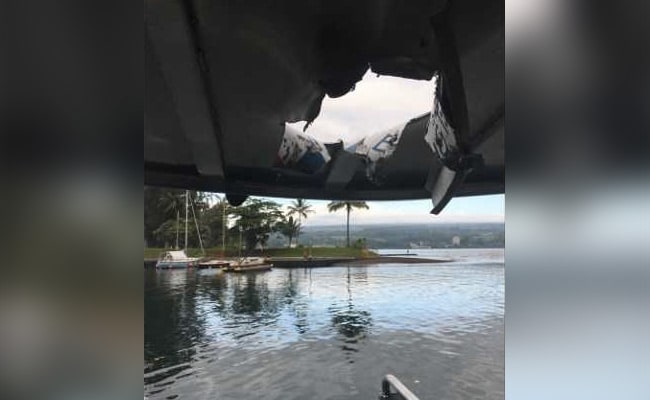 A volcanic explosion injured more than 20 people on a sightseeing boat that was watching lava flowing from Hawaii's active volcano into the ocean, officials said Monday.

The boat was off the island's Eastern coast on Monday morning when the volcano sent what officials said was a basketball-sized "lava bomb" through the boat's roof and peppered it with volcanic debris. The Hawaii County Civil Defense Agency said that of the 23 injured, four were taken by ambulances to the hospital, including a 20-year-old woman who was seriously injured after fracturing her femur bone.

Photos posted by Hawaii county officials showed a manhole cover-sized hole in the boat's metal roof. A woman who answered the phone at Lava Ocean Tours confirmed that it was the company's boat that suffered the explosion but declined to comment further. Video posted by reporters on social media showed a large explosion of lava into the air.

The tour boats typically depart from Hilo, the county seat for the island in the early morning for three hours tours that cost $225-250.

"Lava Ocean Tours Big Island lava boat tours are an exciting way to experience the molten hot lava entering the sea," the company says on its website. "See, Hear & Feel the heat from your front row seat onboard one of our world class catamarans."

According to Hawaii News Now, the boat had left with 49 passengers and three crew members on board and had been touring the area around Kapoho, an unincorporated section near the island's coastline where the lava explosions from ongoing eruptions at the Kilauea volcano have destroyed hundreds of homes and completely filled in a popular tide pool bay last month. But with timely evacuations and public attention, few have been injured seriously.

A video posted by Hawaii News Now reporter Mileka Lincoln taken from another lava tour boat captures a massive lava explosion in the water that she said affected the other boat.

"It's unclear how close Turpin's tour boat was to the Kapoho lava ocean entry when the explosion happened, but eyewitnesses report the boat appeared to be 'very close,' " she wrote, noting that the Coast Guard recently changed the mandatory safety perimeter required around ocean lava entries from 100 to 50 meters for the tour operators.

State officials and police said they were investigating the incident. The U.S. Geological Survey volcanologist Wendy Stovall told USA Today that lava bombs can result from the interaction between lava with the ocean, as water turns into steam and causes the lava to explode. Government officials have also been warning about the dangers of laze, potentially dangerous mix of hydrochloric acid, steam and tiny glass particles in the air that results from the interaction of the lava and the water.

Shane Turpin, the captain of the boat in the incident, told the Associated Press that the group had been about 250 yards away from the lava.

#LeilaniEstatesEruption #KilaueaVolcano UPDATE (July 16 at 9 AM): Unbelievable footage from @IkaikaMarzo's crew on board the @KalapanaCulturalTours lava boat captures the lava explosion that sent lava bombs (lava rock and debris) flying into the air, which landed on a tour boat that was operated by Shane Turpin. The Hawaii County Fire Department has just confirmed 12 passengers were injured. We are told three people were taken by ambulance to Hilo Medical Center. Two passengers (no details on gender or age) were in stable condition. One, a woman in her 20s, is in serious condition with a fractured femur. The remaining 9 passengers drove themselves to the hospital, and the Fire Department reported their injuries were not as serious. Hawaii County Fire officials say a lava bomb punctured the roof of the boat, leaving a large hole. One of the railings of the boat was also damaged. The lava tour boat returned to Wailoa Harbor in Hilo and docked near Suisan around 7 AM. #HawaiiNewsNow has learned that the state Department of Land and Natural Resources is taking the lead on this investigation, which will involve the U.S. Coast Guard as well as the county. It's unclear how close Turpin's tour boat was to the Kapoho lava ocean entry when the explosion happened, but eyewitnesses report the boat appeared to be "very close". On July 11, the Coast Guard changed their mandatory safety perimeter zone around ocean entries (Kapoho and Kalea) from 100 meters to 50 meters for licensed lava tour boat operators. I spoke with #IkaikaMarzo, who says he was consulted about the change, but disagreed with it - saying he believed it was unnecessarily close. All other mariners, without explicit written permission from the Captain of the Port of Honolulu, are required to observe a mandatory 300 meter safety zone around all active lava entry point. Stay tuned to @HawaiiNewsNow for the very latest developments! As soon as I have more information, I'll update you. #HInews #HawaiiNews #HNN #WeAreYourSource (Images courtesy @IkaikaMarzo)

"As we were exiting the zone, all of a sudden everything around us exploded," he said. "It was everywhere."

He said that the crew didn't pick up on any warning signs before the explosion.

The volcano's eruption on Hawaii has been an ongoing emergency on the island since May, sending thousands of residents from their homes, destroying hundreds of structures, and captivating the world through arresting images showcasing the earth's raw destructive power. The lava also created a small island meters off the coast this week.

(Except for the headline, this story has not been edited by NDTV staff and is published from a syndicated feed.)
Comments
Hawaiilava bombHawaii tour boat