Kazakhstan's City, Centre Of Unrest, Back Online After 5-Day Blackout 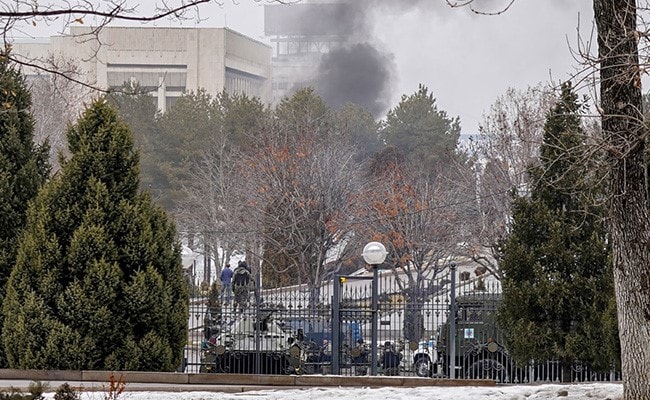 Kazakhstan's largest city was back online and appeared to be returning to normal on Monday, as the nation observed a day of mourning after clashes that left dozens dead and the financial hub of 1.8 million people reeling.

Almaty, the country's former capital, had been nearly completely offline since Wednesday, but local and foreign websites were accessible again Monday morning, following the worst unrest in the ex-Soviet republic's independent history.

The Collective Security Treaty Organisation (CSTO), a Moscow-led regional military bloc that has dispatched peacekeeping troops to the country, was set to hold an online summit on the crisis Monday, with the Kremlin confirming Russian President Vladimir Putin's attendance.

AFP correspondents saw public transport on the streets of Almaty for the first time since protests descended into violence earlier this week, leaving strategic government buildings burned and gutted and businesses counting the costs of a looting spree.

Lyudmila, a pensioner who was waiting for a bus in the city centre and gave only her first name, said she was alerted to the internet's reappearance by a messenger call from relatives in Ukraine.

"I had no idea that we were back online again," she said.

She told AFP that during clashes on Wednesday night, injured soldiers had been dragged into the courtyard of the apartment building where she lived for emergency treatment.

Kazakhstan has framed the violence in Almaty as an attack by "terrorist groups" and expressed displeasure at foreign media coverage of the events, which began with protests over a fuel price hike in the west of the country on January 2.

On Monday the government said foreign media reports had created "the false impression that the Kazakhstan government has been targeting peaceful protestors".

"Our security forces have been engaging with violent mobs who were committing brazen acts of terror," the foreign ministry said in the statement.

But the authoritarian government has also struggled to firm up its own narrative.

On Sunday evening the information ministry retracted a statement that had appeared in an officially run Telegram channel earlier that said more than 164 people had died in the unrest.

Two private websites that had reported the news said the information ministry had told them the statement was the result of a "technical mistake".

Officials previously said 26 "armed criminals" had been killed and that 16 security officers had died.

In total, 5,800 people have been detained for questioning, the presidency said in a statement on Sunday.

Nur-Sultan, the city that replaced Almaty as capital in 1997 and which was renamed in honour of 81-year-old founding president Nursultan Nazarbayev in 2019, saw comparatively little unrest.

The crisis comes with tensions between Moscow and the West at post-Cold War highs over fears of a Russian invasion of Ukraine, with talks between Russia and the US to take place in Geneva on Monday after a working dinner on Sunday evening.

Russia has ruled out any concessions at the talks.

President Kassym-Jomart Tokayev has thanked the Moscow-led CSTO for answering his request for help and sending a detachment of 2,500 troops to the country.

Tokayev says the deployment will be temporary, but US Secretary of State Antony Blinken warned on Friday that "once Russians are in your house, it's sometimes very difficult to get them to leave".

While the precise contours of the political crisis that engulfed Kazakhstan are unclear, it is evident that the ruling elite has been roiled.

On Saturday, authorities announced the arrest on treason charges of Karim Masimov, a high-profile Nazarbayev ally who was dismissed from his post as security committee chief at the height of the unrest.

Nazarbayev, who was widely regarded as holding the strings in the oil-rich Central Asian country despite stepping down from the presidency in 2019, has not spoken in public since the crisis began.

Nazarbayev's press secretary said on Twitter Saturday that Nazarbayev was in "direct contact" with Tokayev and called on Kazakhs to "rally around" the president.

Nazarbayev hand-picked Tokayev as his successor after calling time on more than a quarter-century as head of state.

Tokayev's spokesman said Sunday that he was "taking decisions independently...not running to consultants."