"We've Got A Lot Of Work To Do. It's Not Going To Be Easy": Kamala Harris

"We're going into Wednesday knowing that we're ready to do the work, and we've got a lot of work to do. It's not going to be easy," Harris told reporters at Martha's Table in Anacostia on Monday, observing the National Day of Service. 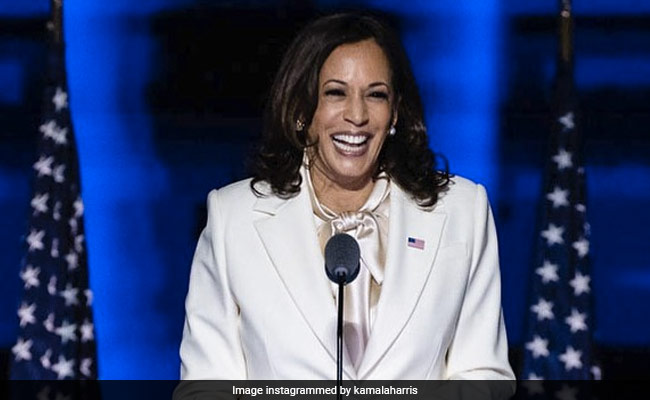 Kamala Harris acknowledged the challenges that lie ahead after January 20.

US Vice President-elect Kamala Harris on Monday acknowledged the challenges that lie ahead after January 20 when Joe Biden will be sworn in as the 46th President of the United States, saying it is not going to be easy.

"We're going into Wednesday knowing that we're ready to do the work, and we've got a lot of work to do. It's not going to be easy," Harris told reporters at Martha's Table in Anacostia on Monday, observing the National Day of Service.

"As we have discussed, Joe has outlined our plan for vaccinations, our plan for recovery, and in particular relief for working people, for families. And there is a lot to do. Some of them say that ours are ambitious goals, but we do believe with hard work and with the cooperation and collaboration of the members of the United States Congress that we can get it done," Harris said in response to a question.

Asked if she felt safe going to the inauguration, she said, "I am very much looking forward to be sworn in as the next vice president of the United States and I will walk there to that moment proudly with my head up and my shoulders back".

Kamala Harris and the future Second Gentleman of the US Doug Emhoff participated in a service event at Martha's Table in Anacostia on Monday, packing food into plastic bags which will be distributed.

The couple were seen packing bags with the list laid out for them - two potatoes, two oranges, a macaroni and cheese, etc.

"We're here at Martha's Table to support the work that is happening. Volunteers are here. There are a number of high school students from Jack and Jill who are here, in honour of the Day of Service when we recognize and pay tribute to the work of Dr. King," she said.

"I think it's so important to remember that Dr. King was killed in large part, I believe, because he was on the verge of bringing together the civil rights movement around racial justice with the fight for economic justice," she said.

"When we look at where we are as a country today, when we look at recent events, we know that the fight Dr. King was engaged in is still a fight in America, which is to recognize the connection and to recognize our collective responsibility to address these injustices," the vice president elect said.

And we're here to renew the commitment that we have to service, and to serve others especially those in need," Harris said.

Thousands of volunteers across the country participated in the National Day of Service -- an opportunity for all Americans to unite and serve at a time when the global pandemic calls on us to work together and support the communities, the transition said.

The Presidential Inaugural Committee, working closely with AmeriCorps and local, state, and national service partners, has organized more than 2,500 events in all 56 states and territories.

The day culminated in an hour-long virtual live-stream celebration that featured a diverse array of entertainers, speakers, and stories of service celebrating the legacy of Martin Luther King Jr and the Biden-Harris Administration's commitment to service.

In 1994, Congress passed legislation designating the Martin Luther King Holiday as a national day of volunteer service - "a day on, not a day off." Since then, AmeriCorps - the federal agency for service and volunteerism - has led this national effort to engage Americans in honouring Dr King's legacy through service on MLK Day.