Justin Trudeau Apologizes For Turning Away Jewish Refugees In 1939

"While decades have passed since we turned our backs on Jewish refugees, time has by no means absolved Canada of its guilt or lessened the weight of its shame," Justin Trudeau said in a speech. 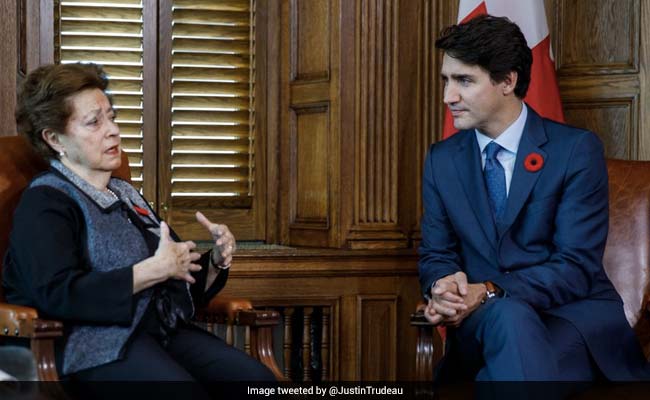 Justin Trudeau sat down in his office with the only surviving passenger of the MS St. Louis.

On May 15, 1939 the ocean liner MS St. Louis departed Germany and crossed the Atlantic with 907 German Jews aboard, desperate for refuge from persecution.

The passengers were barred from disembarking at Cuba, and then denied entry in the United States and Canada due to the discriminatory immigration policies of the time.

Forced to return to Europe, many were sent to concentration camps, and 254 died in the Holocaust.

Their emotional journey would later inspire the 1974 book "Voyage of the Damned" and a movie of the same title.

"While decades have passed since we turned our backs on Jewish refugees, time has by no means absolved Canada of its guilt or lessened the weight of its shame," Trudeau said in a speech.

"Today, I rise in this House to issue a long overdue apology to the Jewish refugees Canada turned away," he said.

"We are sorry for the callousness of Canada's response," he said. "We refused to help them when we could have. We contributed to sealing the cruel fates of far too many at places like Auschwitz, Treblinka, and Belzec."

Earlier the prime minister sat down in his office with one of the survivors of that tragic voyage, Ana Maria Gordon, and her family to discuss the need to continue fighting anti-Semitism.

"We had a tragic reminder just a few weeks ago that we need to continue to work together," Trudeau told reporters, alluding to the massacre of 11 people at a synagogue in the US city of Pittsburgh on October 27.

The attack was believed to be the deadliest anti-Semitic attack in recent American history.

In Canada, incidents of anti-Semitism -- including harassment, vandalism and violence -- reached a record high in 2017, doubling from the previous year to 1,752, according to the Jewish advocacy organization B'nai B'rith.

In parliament, Trudeau called on all Canadians to "stand up against xenophobic and anti-Semitic attitudes that still exist in our communities, in our schools, and in our places of work."

"Holocaust deniers still exist. Anti-Semitism is still far too present," he said. "Discrimination and violence against Jewish people in Canada and around the world continues at an alarming rate.

"Sadly, these evils did not end with the Second World War."

(Except for the headline, this story has not been edited by NDTV staff and is published from a syndicated feed.)
Comments
Justin TrudeauJewish Refugees