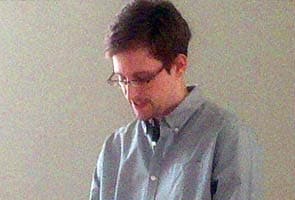 File picture of Edward Snowden at the Moscow airport

Washington: Meeting his Russian counterparts amid controversy over Edward Snowden's asylum, US Secretary of State John Kerry today said "diplomacy, like hockey, can sometimes result in the occasional collision".

"The relationship between the United States and Russia is, needless to say, a very important relationship, and it is marked by both shared interests and at times colliding and conflicting interests," he said.

Days after US President Barack Obama cancelled a summit with his counterpart Vladimir Putin in Moscow to protest Russia's decision to grant asylum to Snowden, Kerry along with the Defence Secretary, Chuck Hagel, met their counterparts the Russian Foreign Minister Sergey Lavrov, and the Defence Minister Sergey Shoygu.

Top American and Russian leaders were candid in acknowledging the differences the two countries are having not only on Edward Snowden, the former CIA contractor wanted by US on the charges of espionage, but recommitted themselves to continue with their relationship.

"It's no secret that we have experienced some challenging moments, and obviously not just over the Snowden case. We will discuss these differences today for certain. But this meeting remains important above and beyond the collisions and the moments of disagreement," he said.

"It is important for us to find ways to make progress on missile defense, on other strategic issues, including Afghanistan, Iran, on North Korea, and Syria," Kerry said.

"Of course, we have disagreements. We'll continue discussing matters on which we disagree calmly and candidly," Lavrov said on the top of the meeting.

"We live in a very defining time in the world, and our countries have some responsibility to each other, obviously, but to the world in many respects. We are leading nations, and we must work with alliances and others as to how we find these solutions to these great challenges," Hagel said.

"We couldn't but discuss issues that are of concern to our Washington colleagues. Afghanistan, in the first place, and the forthcoming 2014 events. Of course, we spoke about Syria.

We also discussed bilateral cooperation, ways to intensify our contacts. We agreed to step up cooperation between deputy ministers of the two countries," Shoygu said.

Promoted
Listen to the latest songs, only on JioSaavn.com
"But missile defence should probably be discussed in this expanded format, the way we have gathered today," he said.