Joe Biden's gaffe: calls himself 'proud president of US' 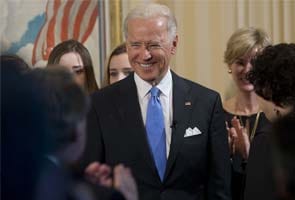 Washington: Joe Biden, who was today sworn in as the US Vice President for a second term, made a gaffe hours ahead of his oath ceremony by calling himself "proud president of the United States".

"I'm proud to be president of the United States," Biden told his supporters at the Iowa State Society inauguration ball yesterday.

The audience laughed as Biden's son Beau, Delaware's attorney general, corrected his 70-year-old father and told the crowd he had misspoken.

Biden, who is known for making gaffes during US presidential campaigns, quickly corrected himself.

During the 2008 campaign, in a speech, Biden pointed out Missouri state Senator Chuck Graham and invited him to stand up to address the crowd. Unfortunately, Graham was wheelchair-bound.

Promoted
Listen to the latest songs, only on JioSaavn.com
The Democrat leader, who will be close to his 74th birthday on the next election day in 2016, has not ruled out the possibility of running for the White House.

Biden was administered the oath of office on his family bible by the Supreme Court Associate Justice Sonia Sotomayor at a private ceremony at his official residence today, following a private mass.