The former vice president entered the Delaware State Building in Wilmington where he joined the record number of Americans who have voted early or by mail -- 74 million as of Wednesday -- as people seek to avoid crowded polling stations during the Covid-19 pandemic. 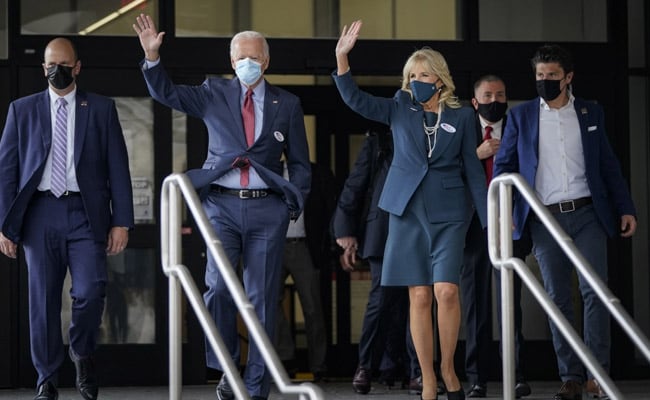 Joe Biden casted his ballot in the US presidential race Wednesday in Delaware.

Democrat Joe Biden insisted Wednesday he will tackle coronavirus from Day 1 if elected president but warned there is no magic "switch" to end the pandemic, as Donald Trump campaigned across America seemingly unfazed by Covid-19's dangers.

Less than a week before decision day, Biden cast his presidential ballot in his home state of Delaware and met with health experts, as he fine-tuned his pandemic response plan, seeking to reassure voters that he would use science to fight the contagion.

"Even if I win it's going to take a lot of hard work to end this pandemic," the former vice president said in Wilmington.

"I'm not running on a false promise of being able to end this pandemic by flipping a switch," he added. "But what I can promise you is this: we'll start on Day 1 by doing the right thing. We'll let science guide our decisions."

Biden, 77, continues to campaign cautiously ahead of next Tuesday, holding low-key events with small, socially distanced crowds that look nothing like the traditional scene in the closing days of a White House race.

On Saturday, Biden is to get some star power when he's joined on the stump in Michigan by Barack Obama, whom he served as vice president. It will be their first joint in-person appearance of the 2020 race, though Obama has been delivering strategically timed broadsides at Trump throughout.

Trump, by contrast, is finishing his campaign in an extreme test of endurance, with final pitches to voters both in swing states and also states that he won in 2016 yet now has to defend.

After rallying supporters in three states Tuesday, Trump, 74, overnighted in a fourth -- Nevada -- then flew to Arizona for two more rallies.

On an airport tarmac in Bullhead City, Trump all but ignored the Covid-19 crisis and many supporters didn't bother with masks as they cheered his defiant insistence on a landslide victory November 3, despite polls pointing to heavy chances of defeat.

"It's going to be a great, great red wave," he boomed, referring to the Republican color.

Under shadow of Covid

The pandemic has upended all aspects of American life and overshadowed the election, with polls showing it may well be the president's undoing as cases hit record levels in the US.

With many Americans fearing the risk of voting in crowded polling stations, a remarkable 74.7 million people have already cast their ballots.

Some 57.4 percent of Americans disapprove of Trump's coronavirus response, while 39.8 percent approve, according to a poll average compiled by tracker FiveThirtyEight.com.

By contrast, a RealClearPolitics average shows 50 percent approve of Trump's handling of the economy while 47.8 disapprove.

As polls show Biden leading in the final week, the 77-year-old has gone on electoral offense as he seeks to expand his state-by-state path to victory.

On Tuesday, Biden visited Georgia, traditionally Republican territory, and he has said he would travel to Florida, Wisconsin and Michigan in the race's closing days.

All are states that Trump won in 2016 but which are up for grabs this year. Trump's very different approach was illustrated by his campaigning Tuesday in Nebraska, a sparsely populated state with only marginal influence on the election.

Trump has repeatedly stressed that the US is "rounding the turn" on the pandemic, but figures do not bear that out: more than 227,000 Americans have died and daily case averages have risen.

But his own chief infectious disease specialist, Anthony Fauci, offered a warning Wednesday.

Even if a Covid-19 vaccination comes on line this year, "it will be easily by the end of 2021, and perhaps even into the next year, before we start having some semblances of normality," he told a University of Melbourne panel.

Biden blasted the president, calling his administration's response to the pandemic "an insult to every single person suffering from Covid-19 and every family who's lost a loved one."

With American and European Covid-19 cases rising and no agreement yet on a new US pandemic rescue package in Congress, the Dow Jones on Wednesday sank three percent by early afternoon, its fourth straight session of losses.

The White House said meanwhile that it was closely following the situation in Philadelphia, where a second straight night of unrest and looting has set the city on edge following the fatal police shooting of a Black man, the latest to spark anger in the United States.