The president hailed the pontiff as "the most significant warrior of peace I have ever met", in a meeting at the Vatican lasting more than an hour. 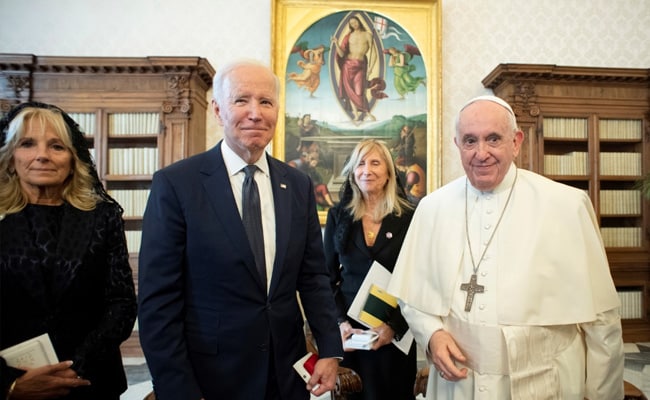 US President Joe Biden, only the second Catholic to hold his office, had a private audience with Pope Francis on Friday at the start of a European trip aimed at reasserting US international credentials.

The president hailed the pontiff as "the most significant warrior of peace I have ever met", in a meeting at the Vatican lasting more than an hour -- longer than his two predecessors were given.

It was closed to the media but footage released by the Vatican showed a good-humoured gathering full of smiles, with Biden at points visibly moved, and elsewhere telling the pope "God love ya".

He gave the pontiff a presidential coin recalling the regiment in which his son Beau Biden, who died from cancer in 2015, had served, saying: "I know my son would want me to give this to you."

Biden, who is open about his faith and how it gives him strength, has already met Francis three times before but this was their first tete-a-tete since he entered the White House.

It was arranged to coincide with the G20 leaders summit in Rome and next week's crunch UN climate talks in Glasgow, in which Biden hopes to push his mantra that "America is back" after the Trump years.

Both Biden and the pope have been outspoken on the need to tackle global warming -- Francis repeated his call for action in a BBC broadcast Friday -- and this was a dominant theme of their talks.

"I thanked His Holiness for his advocacy for the world's poor and those suffering from hunger, conflict, and persecution, and lauded his leadership in fighting the climate crisis and ending the pandemic," the president tweeted later.

He said the meeting, part of which was with his wife Jill, had been "an honour".

The Vatican said they discussed climate change, the pandemic and the issue of refugees and migrants, as well as "the protection of human rights, including freedom of religion and conscience".

There was no mention from either side of the red-button issue of abortion. Biden supports the right to choose, while Francis, 84, has slammed terminating pregnancies as "murder".

The pontiff has nonetheless distanced himself from a push by conservative US bishops to deny communion to politicians supportive of abortion rights -- which would include Biden.

Shortly before leaving Washington, Biden unveiled a "historic" blueprint for remaking America's economy, a $1.75 trillion Build Back Better social welfare package on which he has staked his domestic legacy.

He had hoped to secure the deal before leaving, but it has been dogged by weeks of internal party feuding -- it remains to be seen if the revamped deal will gain the support of lawmakers.

After Donald Trump's bruising diplomacy, Biden is hoping to reassert US global leadership, including in speaking up for democracies against regimes such as China, and on climate change.

Ahead of the crucial COP26 summit starting on Monday, Biden said his new plan includes "the most significant investment to deal with the climate crisis ever" -- $550 billion to cut greenhouse gas emissions.

"America is back in a leadership position on climate in a way that will be broadly welcomed," National Security Advisor Jake Sullivan told reporters on the flight over.

But Biden will have some fence-mending to do after a chaotic withdrawal from Afghanistan, which irritated US allies, and a major spat over nuclear-powered submarines.

He will meet with French President Macron on Friday for the first time since the submarine row, in what Sullivan said was expected to be a "constructive and deeply substantial meeting".

Biden and Macron are expected to meet again Saturday alongside German Chancellor Angela Merkel and Britain's Boris Johnson to discuss attempts to get Iran back into negotiations on submitting its nuclear industry to international inspections.