EU Chief 'Does A May', Appears To Mock British PM's Dancing Moves

Theresa May sashayed on stage last week to the sound of Abba's "Dancing Queen" - a self-mocking gag about a recent trip to South Africa where she had danced with schoolchildren. 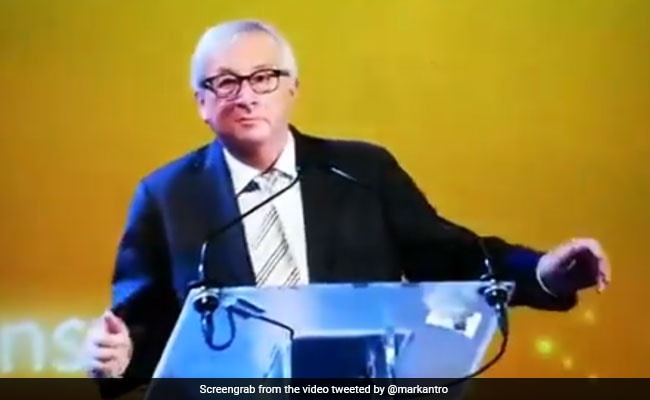 EU chief executive Jean-Claude Juncker threw a little dance move before a speech on Monday, raising a laugh in Brussels as he appeared to mimic Theresa May but angering supporters of the embattled British prime minister and her Brexit plan.

May sashayed on stage last week to the sound of Abba's "Dancing Queen" - a self-mocking gag about a recent trip to South Africa where she had danced with schoolchildren. May then used the stage to rally her divided party behind her efforts to negotiate a smooth withdrawal from the European Union.

Preparing to speak at a conference on Monday, Juncker was unable to start as music continued to play in the hall. Looking up from his notes, the European Commission president, whose negotiators are locked in talks with May's officials, spread his arms and moved his shoulders and hips in time with the rhythm.

A couple of seconds was enough to provoke laughter in the room as the music faded. Juncker gave a broad grin in response.

Britons were quick to spot how close his gestures were to May's before her keynote speech last Wednesday at the annual conference of her Conservative Party.

The pro-Brexit Daily Mail said he appeared to "mock" May, while online comments on its website reflected anger over the EU's refusal to accept the May government's terms for leaving the bloc next March.

A spokesman for Juncker, a former premier of Luxembourg, said his improvised performance was "not directed at anyone" and repeated that the Commission president has "great respect" for May.