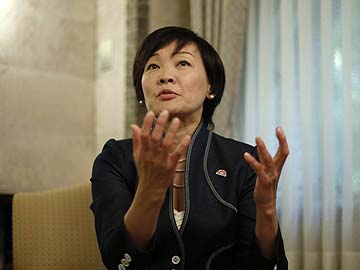 Tokyo: Japanese First Lady Akie Abe - often called the "domestic opposition" for her penchant to speak out - said on Thursday the country should consider cutting wasteful spending and boosting the economy before going ahead with a rise in the sales tax to 10 per cent, as her husband wrestles with just that decision.

Mrs. Abe is a rarity among Japan's First Ladies, most of whom have stayed in the background. While her outspokenness wins praise from fans, some cynics suspect that Prime Minister Shinzo Abe's aides welcome her role as softening the image of a leader seen by detractors as a nationalist with pro-business policies.

"Considering the falling birth rate and ageing society, it probably can't be helped," Akie Abe, 52, told Reuters in an interview on Thursday at the prime minister's official residence, referring to an eventual rise in the sales tax.

"I think there are still areas where, if not a waste, taxes are not being used properly and could probably be fixed," she added. "I can understand there are aspects that would be difficult if we don't raise the sales tax, but in my personal opinion, before doing that, shouldn't we put a bit effort into the economy, fix what can be fixed and cut what can be cut?"

But she added: "This won't change just because I say so."

Prime Minister Abe must decide by December whether to proceed with a second-stage rise in the sales tax to 10 per cent that is planned for October 2015 to help curb Japan's huge public debt and fund the ballooning costs of its ageing society.

But an initial rise to 8 per cent from April triggered a sharp contraction in the economy in the three months to June, raising doubts about whether Abe should go ahead with the hike.

Mrs. Abe said she had urged the prime minister not to raise the levy to 8 percent from April to no avail. Asked about this time, she said: "I wonder."

In another departure from her husband's policies, Mrs. Abe reiterated that she believed Japan should exit nuclear power if alternate energy sources can be found, given the risks shown by the March 2011 Fukushima disaster, the world's worst atomic accident since Chernobyl.

"Once an accident occurs, it is a terrible thing that cannot be undone," she said. "If there are alternative sources of energy, I would like them to stop (nuclear power). I'd like them not to restart off-line reactors."

But she added that she had not made this point forcefully to her husband because of the delicateness of the issue. Surveys show that many Japanese oppose reactor restarts and a big majority favour at least a gradual exit from atomic power.

Abe's government has said it will proceed with restarting reactors that clear new safety standards.

Mrs. Abe has both won hearts and triggered backlashes for speaking out, but said she had learned not to be as sensitive to criticism as she was when her husband became premier for the first time in 2006. Faced with ill health and political deadlock, Abe quit as premier after one troubled year.

Promoted
Listen to the latest songs, only on JioSaavn.com
The first time, Mrs. Abe said she felt media were just waiting for her to make a misstep.