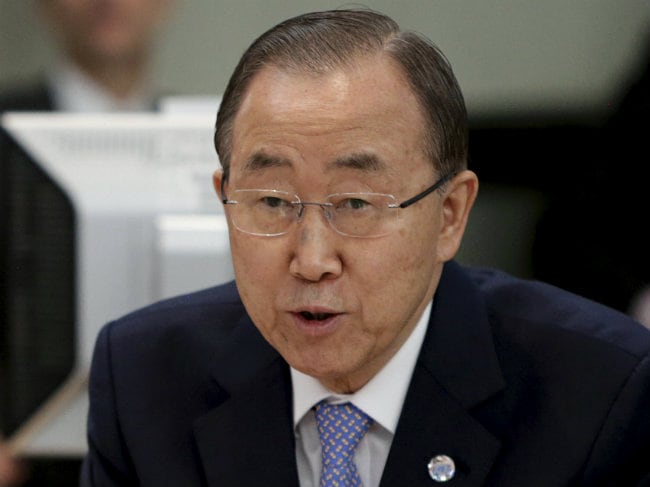 Tokyo: Tokyo said Monday it has complained to the United Nations over Secretary General Ban Ki-moon's plan to attend a huge military parade in Beijing to mark the 70th anniversary of Japan's defeat in World War II.

Top government spokesman Yoshihide Suga called on the UN to be "neutral", after Tokyo issued a complaint to the 193-member body on Friday.

"We want to encourage member countries to look to the future and not to unnecessarily focus on particular events in the past," Suga told a press briefing Monday.

The display planned for Thursday, a show of strength which comes as China takes a more assertive stance regionally, will see 12,000 soldiers and 500 pieces of hardware roll through Tiananmen Square, with almost 200 aircraft flying overhead.

The UN's Ban is also on the list, while Japanese officials, including Prime Minister Shinzo Abe, are staying away.

Tokyo previously said the nationalist Abe had decided to put off a visit to China around the time of the parade owing to opposition at home over his controversial bid to expand the role of Japan's military.

But local media said the government was concerned about the anti-Japanese nature of the display.

Abe had previously expressed a desire to meet Chinese President Xi Jinping in early September, but the talks had not been confirmed.

"The Japanese government's 'concern' about UN Secretary-General Ban Ki-moon's visit to Beijing betrays the narrow-mindedness of the Shinzo Abe administration and its obstinacy in clinging to wrong perceptions of history," the China Daily newspaper said in an editorial Monday.

"Such an open display of displeasure is against diplomatic etiquette, not to mention that Japan's concerns are ill-grounded as well as unreasonable."

Former Japanese prime minister Tomiichi Murayama -- who issued a landmark apology for the war in 1995 -- will be present at the commemorations in a personal capacity.

France and Italy will send their foreign ministers, officials said, but the governments of the US, Germany and Canada will be represented only by their resident ambassadors.

China has struggled to attract global interest for the parade as world leaders are wary of the tone of the event, and the risk of lending it legitimacy.

Beijing is becoming increasingly assertive in the region and regularly accuses Tokyo of failing to show sufficient contrition for Japan's 20th-century invasion of China.

The conflict is officially known in the country as the "Chinese People's War of Resistance against Japanese Aggression and the World Anti-Fascist War".