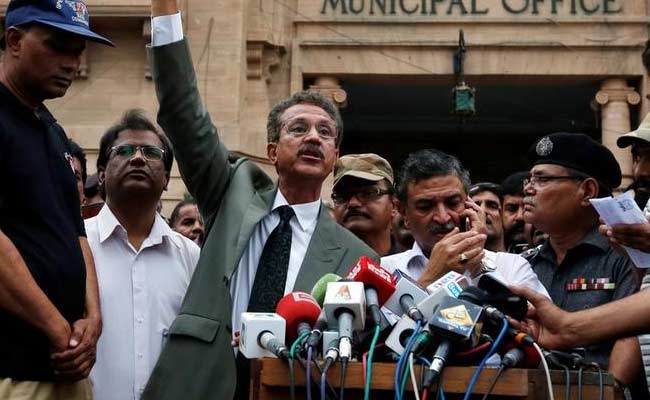 Waseem Akhtar, 60, was brought from the central jail in heavy security. (Reuters Photo)

Karachi: Waseem Akhtar, a jailed leader of Mutthaida-e-Qaumi Movement (MQM) in Pakistan, today took oath as Karachi's mayor after the Sindh High Court allowed him to attend the ceremony.

The oath-taking ceremony which was attended by foreign diplomats, businessmen and political leaders was delayed for nearly two-and-half-hours as the Sindh High Court heard and dismissed at least two petitions challenging the right of Akhtar to take oath as Mayor of Pakistan's biggest city and financial hub.

Waseem Akhtar, 60, was brought from the Central jail in heavy security and took oath along with his running mate Arshad Vohra who took oath as deputy mayor.

Karachi has not had a mayor since 2010 when Mustafa Kamal completed his five-year term.

Akhtar is facing several charges and serving judicial custody in connection with the violence on May 12, 2007 which is also known as 'Black Saturday' riots. A series of violent clashes took place on May 12, 2007 between rival political activists in Karachi with the MQM members who were opposing the arrival of suspended Chief Justice Ifthkar Ahmed Chaudhary at the Karachi airport while other parties, including the Pakistan Peoples Party and Awami National Party (ANP), supported Chaudhary's arrival.

Gunfights and clashes erupted across the provincial capital in which nearly 50 people were killed and scores wounded and millions of property, petrol pumps, shops and vehicles destroyed in arson and vandalism.

Akhtar made it clear after taking oath that he wanted to serve Karachi and Pakistan and was mayor of Karachi not the MQM.

Promoted
Listen to the latest songs, only on JioSaavn.com
Raising slogans of "Jeeya Bhutto", "Jiya Mutthaida", and "Jiya Imran Khan", Akhtar said he wanted to take along all opposition parties and work with them to improve the condition of Karachi.

"I am confident that I will get justice from the courts soon and I will be meeting you and the business community to improve conditions in Karachi," he said addressing foreign diplomats attending the ceremony.
Comments
Waseem AkhtarMutthaida-e-Qaumi MovementMQM PakistanKarachi Mayor