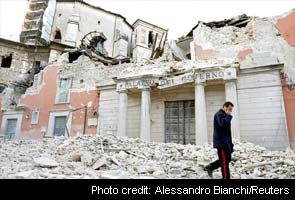 Rome: Seven prominent Italian earthquake experts were convicted of manslaughter on Monday and sentenced to six years in prison for failing to give adequate warning to the residents of a seismically active area in the months preceding an earthquake that killed more than 300 people.

Speaking in a hushed courtroom in L'Aquila, the city whose historic centre was gutted by the April 2009 earthquake, the judge, Marco Billi, read a long list of names of those who had died or been injured in the disaster before he handed down the sentences to six scientists and a former government official. The defendants, who said they would appeal the decision, will also have to pay court costs and damages of $10.2 million.

The seven, most of them seismologists and geologists, were members of the National Commission for the Forecast and Prevention of Major Risks, which met shortly before the quake struck - after weeks of frequent small tremors - but did not issue a safety warning.

The verdicts jolted the international scientific community, which feared they might open the way to an onslaught of legal actions against scientists who evaluate the risks of natural hazards. "This is the death of public service on the part of professors and professionals," said Luciano Maiani, the current president of the risks commission, according to the news agency Ansa. The legal and media pressure prompted by the trial have made it impossible to carry out professional consultancies for the state, he said, adding, "This doesn't happen anywhere else in the world."

Thomas H. Jordan, a professor at the University of Southern California, led a commission that after the disaster advised the Italian government about better ways to communicate earthquake risks to the public. He described the verdicts as incredible, "given that they have just convicted scientists for basically doing their job during a time of crisis."

"I'm afraid it's going to teach scientists to keep their mouths shut," he added.

Scientists said the case raised the issue of when a public warning is appropriate. While predicting the exact time and location of an earthquake is not possible, seismologists are increasingly able to forecast the likelihood that a quake might occur in a certain area within a certain time. But if the likelihood is very low - as it was in this case, despite the increased seismic activity in the weeks before - a warning may do more harm than good. Lawyers for the defendants were unanimous on Monday in their condemnation of the sentence, which exceeded the prosecution's request of four years in prison, and vowed to appeal.

"I wasn't expecting this," said Alfredo Biondi, a defence lawyer. He described the ruling as one of the most erroneous that he had encountered in his long career.

"This was a trial that should not have been held in L'Aquila" because the emotional impact of the quake is still felt so strongly in the city, said Filippo Dinacci, who represents two of the defendants.

More than three years after the earthquake, L'Aquila, in the Abruzzo region east of Rome, has yet to recover fully. Its architecturally rich centre is still largely abandoned, and residents are still mourning the dead. There are some sporadic signs of reconstruction around the centre, including the inauguration last month of an auditorium designed by Renzo Piano, but the overall mood in the city speaks more of discouragement and dismay.

The city and surrounding towns were felled by the magnitude 6.3 quake in the early hours of April 6, 2009. The disaster left thousands homeless and killed 309, many of them in their sleep.

Six days before the quake, the risks commission met to assess the situation after the period of frequent small quakes. The seismic activity had made the public anxious, as had a series of specific quake predictions - none of which proved to be accurate - by a local man who is not a scientist. After the meeting, some commission members gave encouraging statements to the news media, which prosecutors said gave residents an overly reassuring picture of the risks they faced. The commission, prosecutors charged, did not uphold its mandate and consequently did not allow residents to make informed decisions about whether to stay or leave their homes.

In his closing arguments on Monday the prosecutor, Fabio Picuti, cited a United States court ruling that blamed the Army Corps of Engineers for "monumental negligence" for some of the flooding from Hurricane Katrina, Ansa reported. That case, Mr. Picuti said, demonstrates that it is possible to fall short of preventing and predicting a risk, according to Ansa.

Relatives of the victims cheered the decision. "It's just a tiny bit of justice so that it doesn't happen again," said an unidentified woman on Sky television.

The court did not rule on whether earthquakes can be predicted. But Fabio Alessandroni, a civil lawyer who represents the relatives of more than a dozen victims, said the sentence showed that it is possible to have a "culture of prevention."

Promoted
Listen to the latest songs, only on JioSaavn.com
"It is possible to predict a risk and to adopt measures that mitigate that risk," Mr. Alessandroni said. "It's what the commission is supposed to do," taking various elements, like a city's seismic history, into account. "And this was not done in L'Aquila."