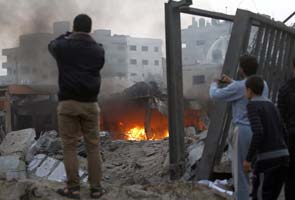 The latest bloodshed in the densely populated coastal enclave came after a night of earth-rattling raids, one of them levelling a police station, and sustained fire from Israeli navy ships.

Israel's military said it had taken over programming from a Hamas-owned television station "to broadcast warnings".

As the violence raged for a sixth day, ceasefire efforts gathered steam, with senior Hamas officials in Cairo saying Egyptian-led talks on Sunday with Israel were "positive" but now focused on the need to guarantee the terms of any truce.

After a strike on a Gaza City home killed a family of nine on Sunday, the bloodiest day yet of the conflict with 29 killed, angry mourners flocked to the funeral of the five children and four adults whose bodies were carried through streets wrapped in Palestinian flags.

"Do children fire rockets?" shouted a man through a loudspeaker, as the crowd roared back: "No!"

The violence, which comes amid an Israeli election campaign, raised the spectre of a broader Israeli military campaign like its 22-day Operation Cast Lead, launched in December 2008.

Analysts say Israel's leadership appears satisfied with the success of Operation Pillar of Defence, which it launched on Wednesday aimed at halting Palestinian rocket fire, and that could it be ready for a ceasefire.

But the Jewish state has warned it is ready to expand the operation, while Gaza's rulers Hamas may feel emboldened after securing the support of the recently installed Islamist governments of Egypt and Tunisia.

Since the start the violence, Israel has pressed a relentless aerial campaign over Gaza which has shown little sign of letting up, although the intensity of the strikes has fallen since a high of 332 on Friday.

To date, the army says it has struck more than 1,350 targets in Gaza, as militants have fired more than 850 rockets over the border, at least five of them aimed at greater Tel Aviv and one at Jerusalem.

An Israeli spokeswoman said there was a lull overnight with 16 rockets fired over the border during the morning, and another three intercepted by the Iron Dome anti-missile system.

The latest negotiations conducted behind closed doors in Cairo ended without agreement, although all sides have expressed a willingness to engage in more talks.

One Hamas official described the talks as "positive" and now focused on the need to guarantee the terms of truce.

Hamas - emboldened by Arab support - has demanded Israel lift its six-year siege of Gaza as a basic condition for the end to rocket attacks.

The Islamist movement is also believed to be seeking a guarantee that Israel will stop assassinating its leaders. Israel's targeted killing of a top Hamas military commander on Wednesday was the trigger which started the current flare-up.

But Israel has showed little sign of being ready to call off or even briefly halt its campaign.

This has piled even more pressure on Egypt's Islamist President Mohamed Morsi and prompted UN Secretary General Ban Ki-moon to promise to visit the region soon.

Ban was due in Cairo on Monday for talks with the Egyptian leader ahead of a visit to the West Bank to meet Palestinian president Mahmud Abbas. Israeli officials said they expected to receive the UN leader on Wednesday.

Palestinian officials had earlier said it was possible a deal would be reached as early as Monday.

But Israel's Foreign Minister Avigdor Lieberman insisted that "the first and absolute condition for a truce is stopping all fire from Gaza".

At the weekend, Prime Minister Benjamin Netanyahu warned Israel was ready to "significantly expand" its operation and on Monday, public radio reported 40,000 reservists were amassed near the Gaza border.

Analysts believe Israel would closely coordinate any invasion of Gaza with the United States and go in certain of Washington's full diplomatic support.

US President Barack Obama has already sided with the Israeli by blaming the violence on Palestinian rocket attacks.

But Obama said Sunday it would be "preferable" for the Gaza crisis to be resolved without a "ramping up" of Israeli military activity.