In A German Village, The Bell Still Tolls For Hitler 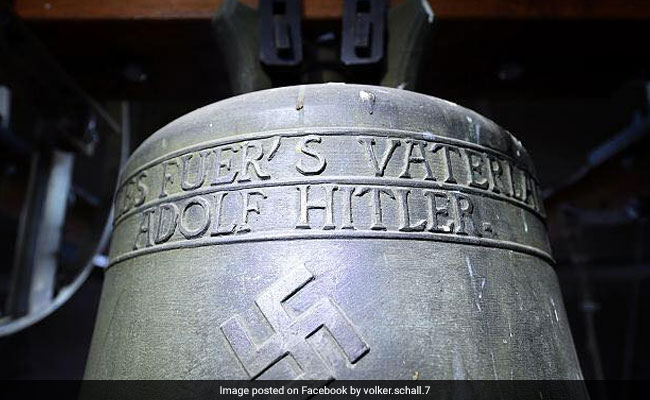 When Nazi iconography was discovered in Herxheim am Berg, some called for the bell's removal.

BERLIN: In a verdant German village, a church bell that bears a swastika tolls. Above the symbol is an inscription: "All for the Fatherland, Adolf Hitler."

When the Nazi iconography was discovered this summer in Herxheim am Berg, some called for the bell's removal, others for its protection as a relic of a shameful national history. The village is still deciding what to do.

Germans have a word for coming to terms with the past, "Vergangenheitsbewaltigung." The word, coined after World War II, has no equivalent in the English language, no analog that might inform the anguished American debate over Confederate monuments -- whose defenders include not just torch-wielding neo-Nazis in Charlottesville but also President Donald Trump.

On a continent riven in the last century by two world wars, genocide and a battle of ideas waged across the Iron Curtain, European nations have accepted the burden of curating the tortured landscapes of their past. Symbols - insignia, flags, monuments - have become explosive at moments of regime change, as shifts in political power alter the cultural currents of the day. East-west friction particularly marks the conflict over remembrance in Europe, from de-Nazification in the Cold War era to contests today over commemoration of communism's past.

"To some extent, Germany is an exceptional case," said Arnd Bauerkamper, a historian at the Free University in Berlin. "Only the abandonment of Nazi ideology, and the clear break with the Nazi past, enabled integration into the West - membership in NATO, German reunification. There never was such a decisive break with Confederate ideas in the United States."

But addressing monuments to people, parties and movements that have fallen into disrepute has not been simple in Germany, or elsewhere in Europe. And while memorials to victims now predominate, particularly here in the former capital of the Third Reich, continuing strife over names and symbols illuminates the continent's enduring divisions.

A statue of Franz Joseph I again occupies a prominent position in Prague, a century after Czechoslovak independence made the commemoration of an Austro-Hungarian emperor unthinkable. Other figures remain unpalatable. For years, Czech officials have debated what to do with the plinth once supporting a statue of Joseph Stalin that weighed 17,000 metric tons, destroyed in 1962 as the communist party line turned against the Soviet dictator.

"It is stimulation for an explanation of this man," she said. "Without this statue of Stalin, and without the liquidation of this statue, the new generation and tourists wouldn't remember this period."

Hungary has removed Communist-era statues from their pedestals and placed them in Memento Park, an open-air museum outside Budapest. Lithuanian's Grutas Park is similar.

This has not quieted dispute over public memorials, however, particularly as Hungarian Prime Minister Viktor Orban has pursued nationalist politics. A monument unveiled in 2014 to mark the 70th anniversary of Hungary's invasion by Nazi Germany was dedicated to "the victims of the German invasion." Critics said it obscured Hungary's involvement in the annihilation of its Jewish citizens.

This year, activists threw paint-filled balloons at a Soviet memorial in Freedom Square in Budapest, in protest of perceived Russian influence in Hungarian affairs.

Jakub Janda, deputy director of the Prague-based European Values Think-Tank, said Russian influence is inseparable from a new effort by Czech communists to commemorate Communist-era border guards, who once policed the country's frontier with West Germany and Austria. Josef Skala, vice chairman of the Czech Communist Party of Bohemia and Moravia, said memorializing the guards is part of an effort to demonstrate that Czechoslovakia, in addition to the Soviet Union, was a victim in the Cold War.

"I, personally, and the party I belong to do not like rewriting history," Skala said. "We did not initiate the Cold War. We made mistakes, yes, but we were defending our interests."

Antipathy to Russia in Poland's ruling nationalist party, Law and Justice, has created a new row over Communist-era monuments in the former Soviet satellite state. The Polish government has set out to remove 500 Soviet monuments, as Russian senators call on President Vladimir Putin to respond with sanctions.

Statues of Stalin and Vladimir Lenin have also been toppled in Ukraine, as part of pro-Europe revolutionary activity that ousted President Viktor Yanukovych in 2014.

Still another approach is that of Romania, which last year unveiled a new sculpture - depicting three wings pointing to the sky - that honors those who died fighting Communist rule in Romania and Bessarabia.

The German capital is a tableau of conflicting impulses. An underground transit station was renamed for Karl Marx in 1946 - not in the communist east but in West Berlin. Parts of the Berlin Wall remain in place, including at Checkpoint Charlie, a major tourist destination. Two years ago, the head of a giant Lenin statue was exhumed and exhibited in Berlin.

The European Union in 2005 dropped proposals to ban both Nazi and communist symbols, due to concerns for freedom of expression as well as disagreement over the scope of the prohibition. Still, many European nations bar the use of totalitarian symbolism. In parts of Eastern Europe, bans expressly extend to communist iconography. In Germany, only the prohibition on Nazi symbols and signals is unambiguous; tourists from across the globe have recently learned that giving the Nazi salute is forbidden.

Many sites associated with the Nazis stand today as haunting museums. Other structures have been demolished to thwart neo-Nazi pilgrimages. A prison that housed Nazi war criminals was razed in 1987, its materials ground to powder and scattered in the North Sea.

But purging Germany of Nazism was not as swift as severe legal codes might suggest. Nor were the country's motives as pure, said Jacob S. Eder, a scholar of German history and Holocaust memory at the Friedrich-Schiller-University in Jena.

"It's important to avoid making the mistake of thinking that now because every German city has some kind of memorial or museum to the Nazi past, that this was an easy process," Eder said. "It's actually quite the opposite."

Certain debates, he said, still confound the public. Parade grounds in Nuremberg where Hitler held massive rallies lie in disrepair. "The question is what to do with it and whether to let it just decay," Eder said.

Controversy in the 1990s and early 2000s marked the conceptualization of the Holocaust memorial in the heart of Berlin.

"People considered it a mark of shame," Eder said - an argument revived this year by Björn Höcke, a state leader of Alternative for Germany, a far-right party poised to enter the German Parliament for the first time in elections next month. "It was the government of Helmut Kohl that pushed for this monument, not out of a sense of moral responsibility but much more a political necessity, to improve Germany's reputation abroad."

From the beginning of the postwar era, as West Germany rebuilt under the Marshall Plan, external pressure guided de-Nazification.

"Our deliverance from the Nazi period wasn't a development within Germany, but we were forced by the Allied forces to become a civilized nation again," said Volker Beck, a Green Party lawmaker who heads the Germany-Israel Parliamentary Friendship Group.

The process was faltering, as ex-Nazis sometimes found their way into power, said Gavriel D. Rosenfeld, author of "The World Hitler Never Made: Alternate History and the Memory of Nazism."

"But the thing that kept West Germany in the American orbit - and committed to de-Nazification - was fear of the Soviet Union," he said. "There was no such fear in the American South."

Marshall aid to reconstruct Western European economies hinged on strict conditions to adopt democratic policies. By contrast, a decade after the Civil War, as federal troops were withdrawn from the South, the decrees of Reconstruction went unenforced.

Promoted
Listen to the latest songs, only on JioSaavn.com
Luisa Beck contributed to this report.