For Trump, Saudis Are Great Allies -And Big Customers For His Business 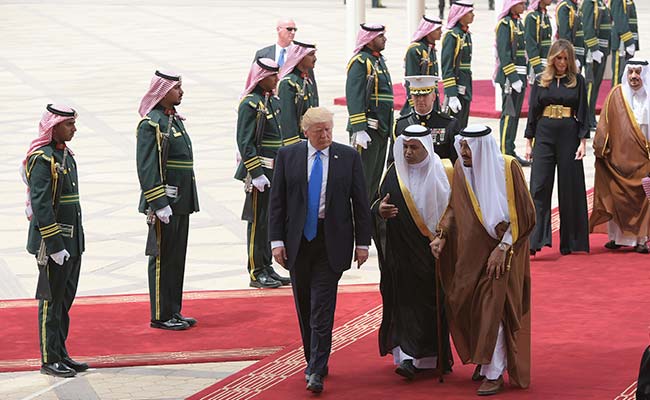 Since Trump won the presidency, Saudis have been patrons of three of his 11 Trump-branded hotels.

For President Donald Trump, Saudi Arabia is not just a political ally. It has also been a customer.

Trump's business relationships with the Saudi government - and rich Saudi business executives - go back to at least the 1990s. In Trump's hard times, a Saudi prince bought a superyacht and hotel from him. The Saudi government paid him $4.5 million for an apartment near the United Nations.

Now, Trump's administration is trying to get answers from Saudi leaders about the disappearance of Washington Post columnist Jamal Khashoggi - a critic of the Saudi regime who was allegedly abducted, and possibly killed, inside the Saudi Consulate in Istanbul last week. The crisis has brought scrutiny to Trump's business ties with the Saudis - and the complexity they add to an already complicated U.S. relationship with the kingdom.

"Saudi Arabia, I get along with all of them. They buy apartments from me. They spend $40 million, $50 million," Trump told a crowd at an Alabama campaign rally in 2015. "Am I supposed to dislike them? I like them very much."

The Trump Organization issued a statement Thursday saying that although it has pursued new hotel deals in Saudi Arabia in the past, it has no current plans to do so.

"Like many global real estate companies, we have explored opportunities in many markets, that said, we do not have any plans for expansion into Saudi Arabia," the company said.

The White House, and the Saudi Embassy in the United States, did not immediately respond to a request for comment Thursday.

Saudi royalty has been buying from Trump dating to 1995, with some of the deals coming during periods when Trump was in need of cash.

In 1991, when Trump was nearly $900 million in debt from failed casino projects, he sold his 281-foot yacht to Saudi Prince Alwaleed bin Talal for $20 million. (The boat had been originally owned by late Saudi billionaire and arms dealer Adnan Khashoggi, a cousin of Jamal Khashoggi.)

A few years later, the prince bought a stake in Trump's Plaza Hotel by agreeing to pay off some of Trump's debts on the property.

Tim O'Brien, a journalist who wrote the 2005 biography "TrumpNation," said these deals were one-sided - in the prince's favor. He said Trump was in dire financial straits, so the prince got a good price.

But there was no indication, back then, that Saudis wanted to curry favor with Trump by giving him a better deal, O'Brien said. "Talal saw him as a profit center," he said, "not as somebody who he was cultivating as a future president."

More recently, Prince Nawaf bin Sultan bin Abdulaziz al-Saud acquired what would become a 10,500-square-foot triplex apartment in a Trump building on the west side of Manhattan. Nawaf sold it in February for $36 million.

During Trump's presidential campaign, he also seemed to be exploring plans to build a hotel in Jiddah, Saudi Arabia's second-largest city, part of an international expansion plan. In August 2015 - two months after he got into the race - Trump established eight new shell companies that included the name "Jeddah."

The names of those corporations - four of which also included the word "hotel" - seemed to indicate Trump was planning a hotel in the city. The Trump Organization did not answer questions about what was planned or if the company was working with a Saudi partner.

Whatever Trump had planned to do in Saudi Arabia, it didn't happen. Trump dissolved the eight shell companies by the end of 2016. On Trump's financial-disclosure forms, he said none had ever produced income.

Since Trump won the presidency, Saudis have been patrons of three of his 11 Trump-branded hotels.

Then this year, the general manager at Trump's hotel on Manhattan's Central Park West (which the Trump Organization manages but does not own) told his investors he had good news. After two down years, revenue for the first quarter had gone up, according to a letter obtained by The Washington Post.

Sanders told the investors that the Trump hotel's Saudi guests did not include Crown Prince Mohammed bin Salman himself because the hotel did not have a suite large enough to suit him. But, he said, "due to our close industry relationships, we were able to accommodate many of the accompanying travelers."

Earlier this year, a spokeswoman for the Saudi Embassy said that no one in the crown prince's official delegation had stayed at Trump's hotel.

She said she did not know if the Saudi government paid the bills for any travelers who did.

At Trump's hotel in Chicago, like the hotel in New York, business has declined since Trump began his polarizing political career - but Saudi customers have been an exception.

Trump's company is now facing two lawsuits alleging that - by doing business with other governments - Trump is violating the Constitution's ban on "emoluments" from foreign states.

One lawsuit, filed by Maryland and the District of Columbia, is seeking Trump Organization records about foreign customers at the Trump hotel in Washington.

The other, filed by about 200 Democratic members of Congress, is aimed more broadly - seeking information about foreign customers in all parts of Trump's business empire. This week, Sen. Richard Blumenthal, D-Conn., the lead plaintiff in that case, wrote that he hoped to uncover more details about Trump's business with the Saudi government.

"Is the Saudi gov't purposely filling Trump's pockets? If so, what do they expect in return?" Blumenthal wrote on Twitter. "I'm fighting in court to hold him accountable."