Clinton said women were held to "maddening" double standards as compared to male counterparts as she encouraged her supporters to get organised to affect change in society. 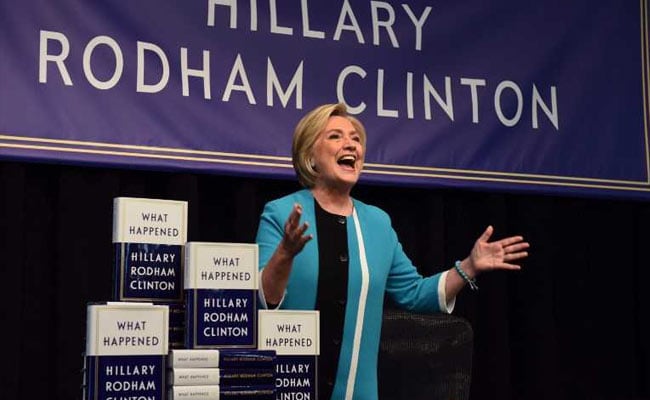 Cheltenham, England: Former U.S. Democratic presidential candidate Hillary Clinton blamed her 2016 election loss to Donald Trump on sexism and the "double standards" women are held to in public life during a promotional tour for her new memoir in Britain on Sunday.

Clinton said women were held to "maddening" double standards as compared to male counterparts as she encouraged her supporters to get organised to affect change in society.

"The only way we'll get sexism out of politics is to get many more women into politics," she said to rapturous applause while promoting her book "What Happened".

Women, she said, were more heavily judged and criticised due to sexism - from their physical appearance to their beliefs - and generally disliked in positions of power rather than in supporting roles, she told the Cheltenham Literature Festival.

The book fair in southwest England, established in 1949, is thought to be the oldest literature festival in the world and showcases poetry, cookery books and celebrity autobiographies.

The former First Lady said her political loss had left her stunned and admitted at times it was hard to get out of bed but long walks in the woods, reading mystery novels, playing with her dogs and yoga helped her to deal with her "grief".

"Everybody gets knocked down. What matters obviously is whether you get yourself back up and keep going," she told an audience of thousands.

"As a person I'm ok, as an American I'm worried," she said, citing Trump's interactions with North Korea and withdrawal from the Paris climate agreement as causes for concern.

Clinton admitted she struggled to attend Trump's presidential inauguration in January but was supported by her husband, former President Bill Clinton.

"My husband read every page of the book, gave me great editorial suggestions and said it was critically important to get it out," she said.

Clinton, 69, urged her female supporters to get organised and encouraged them to sign up to her new platform "Onward Together" which promotes citizen engagement and trains young leaders to run for political office.

"I'm trying to be purposeful, putting my energy into action on behalf of our values," she said.

The former Secretary of State said the post-election analysis of her loss by the media and political pundits had left her feeling dissatisfied, and her book was an attempt to make her own case so future generations understood her campaign.

Looking ahead, Clinton said she was optimistic about the future but ruled out running again for top office although she said she would continue to support the Democratic party.

Promoted
Listen to the latest songs, only on JioSaavn.com
"I'm not leaving politics ... I have a lot to say. I'll continue to say it. I'm not shutting up and sitting down," she said.
© Thomson Reuters 2017

France To Impose Quarantines For Arrivals From 7 More Countries: Report