Harry Potter Books Banned In US School For Having "Real Curses, Spells"

The decision to remove Harry Potter books from the St. Edward's library was widely mocked on social media by fans of the popular series. 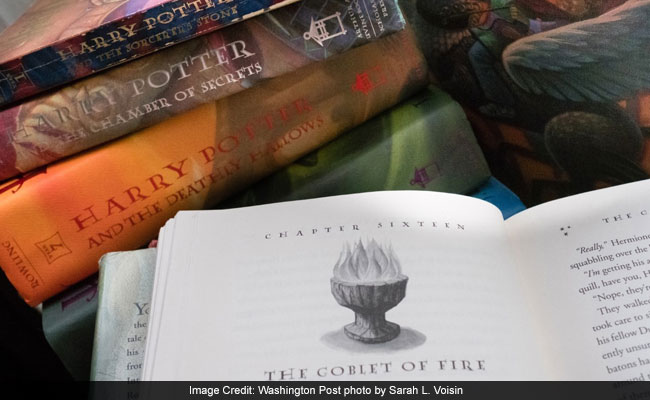 A Catholic school in Nashville, US has banned the Harry Potter books from its library

Before the new school year began, the Rev. Dan Reehil turned to several exorcists for advice.

Reehil, a pastor at St. Edward Catholic School in Nashville, Tennessee, was worried about the heretical lessons that students could learn from the Harry Potter books, he wrote in a Wednesday email to faculty members that was obtained by WTVF. At the advice of the exorcists he consulted, who shared his concerns, he purged the series from the school's library.

"These books present magic as both good and evil, which is not true, but in fact a clever deception," he explained. "The curses and spells used in the books are actual curses and spells; which when read by a human being risk conjuring evil spirits into the presence of the person reading the text."

It's hardly the first time that the novels - chronicling the adventures and coming-of-age of a young wizard - have been kicked off school campuses. Yet the furor over allegations of Satanism and devil worship has died down in recent years, and the choice to remove Harry Potter books from the St. Edward's library appears to have garnered little support from the school community, according to WTVF. Parents who aired their concerns Monday in an anonymous letter shared with the station suggested that the decision raised larger questions about the priest's "fringe" views and his ability to "critically assess and discern fact from fiction," and complained that the decision had been made unilaterally without input from parents or other school administrators.

In an emailed response to parents obtained by the station, Rebecca Hammel, the superintendent of schools for the Catholic Diocese of Nashville, explained that the school's library had moved over the summer, and books that weren't checked out often or weren't deemed age-appropriate for students at the prekindergarten-through-eighth-grade school were purged. The school's pastor, "out of an abundance of caution," decided that the Harry Potter series, which "has received attention over its presentation of magic and witchcraft," should also be removed, she wrote.

Located on the south side of Nashville for over 60 years, St. Edward is "guided by faith and committed to educational excellence," according to the school's mission statement. Attendance at Christian doctrine classes and twice-weekly Mass is mandatory, and the school says that the purpose of its library is to "encourage students to embrace and model the gospel of Jesus Christ by providing materials that support the values and mission of the Catholic Church."

According to Reehil's email to faculty members, the Harry Potter series does not meet that standard. "The books use nefarious means to attain the goals of the characters, including the 'good' characters," he wrote, arguing that an act cannot be considered morally good under Catholic theology if it is accomplished through questionable methods. The Harry Potter books, he claimed, "promote a Machiavellian approach to achieving the ends they desire with whatever means are necessary."

Reehil also claimed that the books "glorify acts of divination; of conjuring the dead, of casting spells among other acts that are an offense to the virtue of religion," and that readers "could be persuaded to believe these acts are perfectly fine, even good or spiritually healthy." He concluded, "Books and other materials which present a possible threat to our faith will not be promoted by our church or school."

According to the Tennessean, which first reported on the edict, Hammel confirmed the authenticity of the email and said that it was sent after a parent asked why the books were gone. Because the Catholic Church has not taken an official position on the Harry Potter series, the school's pastor has the authority to pull the books from its library shelves, she added. To her knowledge, no other schools in the diocese have done so.

Hammel also told the paper that the diocese doesn't "get into censorship" beyond making sure that the books in school libraries are age-appropriate. The Catholic Church believes it's up to parents to determine what's appropriate for their children and "guide their sons and daughters to understand the content through the lens of our faith," she said.

Harry Potter bans have a long history: As the Daily Telegraph notes, the books were repeatedly banned by schools and targeted by church-sponsored book burnings between 1997 and 2007, when the seven volumes in the series were published. Author J.K. Rowling was frequently accused of promoting Satanism and glorifying the occult, and the American Library Association found that between 2000 and 2009, the books were among the most likely to be challenged by parents objecting to their inclusion in school libraries. Pope Emeritus Benedict XVI even weighed in on the controversy when he was a cardinal, writing in 2003 that the books "deeply distort Christianity in the soul before it can grow properly."

The decision to remove Harry Potter books from the St. Edward's library was widely mocked on social media by fans of the popular series, who pointed out that the collection is a work of fiction and that there is absolutely no evidence backing Reehil's claim that the spells and curses described are real. "Everyday I ask myself, 'Can this country get any dumber?' and without fail, it always can," one Twitter user wrote. "Thanks for never letting me down, America."

Not everyone was surprised by the decision. A group of St. Edward parents, who requested to remain anonymous out of fear of retaliation, wrote in a statement shared with WTVF that they had been raising concerns about Reehil's teaching methods since fall 2017. The pastor has a "fanatical obsession with the devil and sin," they wrote, alleging that he had claimed during a school Mass that pop star Lady Gaga "made a pact with the devil for fame and suffers from fibromyalgia as a result."

Reehil and other school officials did not immediately respond to a request for comment late Monday. In a message to parents that was shared with WTVF, Hammel, the superintendent, clarified that students will still be allowed to read Harry Potter books at school. They just won't be able to check those books out from the library.

"We regret that this decision, though made out of concern for the well-being of our students, has yielded a response that has brought undesired attention to the school," she concluded.