"Done" With 2 Children, Oprah Asked Meghan, Harry. What They Said

Offering royal fans a treat, the Harry and Meghan revealed the gender of their second child, chiming in tandem "It's a girl!" and confirming the baby was due in "summertime." 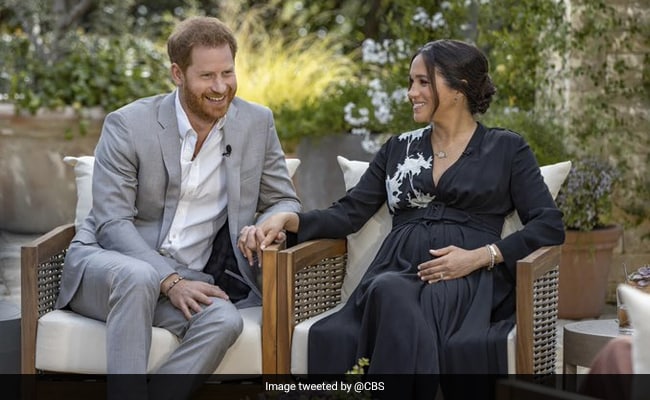 Meghan said that in deciding to exit from royal life, Harry made a decision that "saved my life"

Prince Harry and his wife Meghan had scores to settle in their tell-all interview with Oprah Winfrey Sunday -- but they also offered a generous glimpse of their "fairytale" new family life far from the monarchy.

In a bucolic segment of the interview, the couple invited Winfrey to their home in California's oceanside celebrity enclave of Montecito, where they showed off their chicken coop -- and its hens rescued from a factory farm.

Filmed in rubber boots and a T-shirt, Harry opened up on life during the pandemic lockdown, and shared his joy at taking baby Archie -- who will turn two in May -- for long trips to the beach.

"I guess the highlight for me is sticking him on the back of a bicycle in his little baby seat and taking him on these bike rides, something which I was never able to do when I was young," Harry said.

Asked to name Archie's favorite word, Meghan said he is "on a roll."

"In the past couple of weeks it has been 'hydrate' which is just hysterical," she said.

"Two is it!" quipped Meghan.

Meghan wrapped up with a hopeful look to the future, saying that in deciding to exit from royal life, Harry made a decision that "saved my life."

To the question of whether her story "does have a happy ending," Meghan replied: "It does. Greater than any fairytale you've ever read."