From EU's Donald To US' Donald, "Dear Trump, Appreciate Your Allies"

"Dear America, appreciate your allies, after all you don't have that many.", said Donald Tusk to Donald Trump. Donald Trump is scheduled to be in Brussels by late on Tuesday. (File)

Trump has ramped up criticism of European defence spending in recent days, stressing how many EU members are failing to meet agreed targets for investments, which has raised fears the NATO summit could lead to another bust-up in the transatlantic alliance.

Speaking at a signing ceremony for a new EU-NATO cooperation agreement, Tusk used the opportunity to send a personal message to Trump, who is due to arrive in the Belgian capital later Tuesday.

"I would like to address president Trump directly who for a long time now has been criticising Europe almost daily," the former Polish prime minister said.

"The US doesn't have and won't have a better ally than the EU. We spend on defence much more than Russia and as much as China," he added. "Dear America, appreciate your allies, after all you don't have that many." 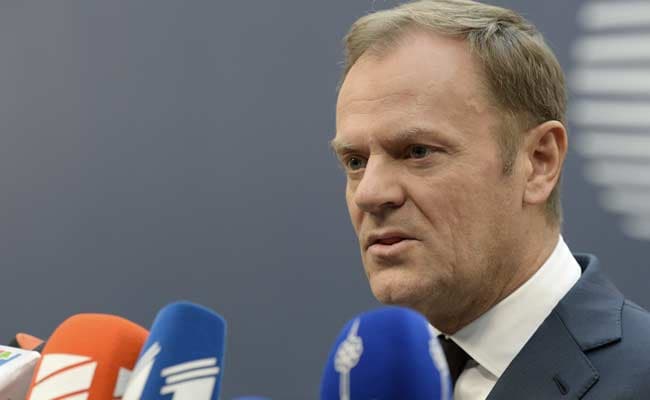 Donald Tusk's comments come in light on the problems emerging between the EU and US. (File)

He concluded with a reminder that European troops had fought and lost their lives alongside Americans in Afghanistan following the September 11, 2001 attacks on the United States.

Trump will meet the Russian leader in the Finnish capital on July 16.

The US leader again took aim at NATO and the EU on Tuesday.

"Getting ready to leave for Europe. First meeting - NATO. The U.S. is spending many times more than any other country in order to protect them. Not fair to the U.S. taxpayer. On top of that we lose $151 Billion on Trade with the European Union. Charge us big Tariffs (& Barriers)!" he wrote on Twitter.

"NATO countries must pay MORE, the United States must pay LESS. Very Unfair!" he said in a second message.

(Except for the headline, this story has not been edited by NDTV staff and is published from a syndicated feed.)
Comments
Donald TrumpDonald TuskUS