The two leaders had "formed a close relationship" during the French premier's first nine months in power, a source in the French presidency said. 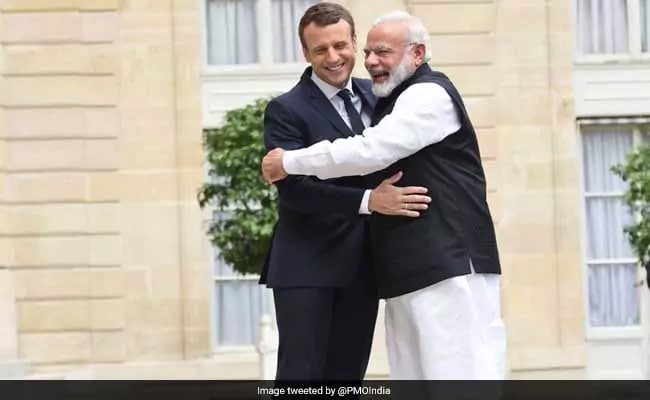 Emmanuel Macron will "spend a lot of time with Narendra Modi," a source in French presidency said

PM Trudeau and President Macron are often compared internationally because of their broadly similar political views, as well as youth and good looks. But the French leader will be eager to make a different impression on his Indian hosts.

Trudeau, already facing suspicions in India that Canada was too soft on Sikh separatists back home, was seriously embarrassed when a Khalistani terrorist was invited to a dinner with him in Mumbai.

Even before this revelation, Prime Minister Narendra Modi had given PM Trudeau a cool reception, but he is expected to be much more welcoming for President Macron after a warm meeting between the two in Paris last year.

Emmanuel Macron will "spend a lot of time with Narendra Modi," a source in the French presidency said, adding that they had "formed a close relationship" during the French premier's first nine months in power.

They will meet Saturday for talks before President Macron attends a solar power summit on Sunday, designed to showcase India and France's commitment to fighting climate change, which both leaders have made a priority.

Travelling with his wife Brigitte, France's 40-year-old president is set to make the almost obligatory visit to the Taj Mahal in Agra, a few hours' drive from New Delhi on Sunday.

On Monday, he heads to the holy city of Varanasi on the banks of the river Ganga, which PM Modi has promised to modernise and clean up.

Having seen PM Trudeau pilloried on social media and in the Canadian press for donning traditional Indian clothing at every opportunity, President Macron is likely to be far more conservative in his dress-sense.

As well as discussing climate change and ways to build closer diplomatic ties, the two biggest issues between the countries in recent years - defence and nuclear energy sales - will also take centre-stage during private talks.

In September 2016, India finally inked a deal to buy 36 French-made Rafale fighter jets, much less than the 126 that were once discussed, but France and its manufacturer Dassault Aviation hold hopes of further sales.

President Macron will also vaunt the quality of Airbus helicopters and Scorpene submarines in a country that buys 90 percent of its equipment from abroad, making it the world's biggest arms buyer.

Obstacles holding up the long-delayed sale of six nuclear reactors will also be discussed.

President Macron has travelled widely since his election last May, presenting himself as the dynamic new face in the European Union who is driving reform efforts in the 28-member bloc.

The centrist has invested time and energy in building relationships with the world's nationalist strongmen, including US President Donald Trump, Turkish President Recep Tayyip Erdogan and Chinese leader Xi Jinping.

France, like much of Europe and the West, sees India as a natural diplomatic and economic partner in Asia because of its role as the world's biggest democracy and its huge yet still untapped business potential.

Promoted
Listen to the latest songs, only on JioSaavn.com
The United States and leading European Union members have spent years wooing successive governments in New Delhi, seeing the country as a counter-weight to China in the region.

Emmanuel Macron is set to announce plans to allow Indian navy ships to use French bases in the southern Indian Ocean where New Delhi remains wary of Chinese expansion in an area that it sees as its strategic backyard.
Comments
French President Emmanuel MacronPrime Minister Narendra ModiEmmanuel Macron in India

Beijing To Impose Restrictions On All US Diplomats In China