Far-right leader Marine Le Pen said she was "unable to find the words to express our indignation" at the sight of Macron posing with two black youths on Saint Martin island in a snap that has gone viral. 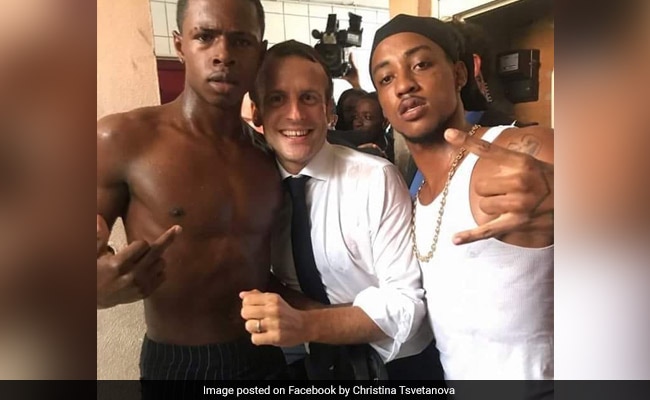 President Emmanuel Macron has shrugged off a controversy over a photo of him posing with a bare-chested youth who is giving the middle finger during a trip to French territories in the Caribbean.

Far-right leader Marine Le Pen said she was "unable to find the words to express our indignation" at the sight of Macron posing with two black youths on Saint Martin island in a snap that has gone viral.

"The reasons I fought to be elected instead of Marine Le Pen and that I am here today is because I love all of the republic's children, whatever their past troubles," Macron shot back Sunday.

Macron, who beat Le Pen in last year's presidential election, on Saturday took a spontaneous trip to the home of one of the youths in the picture, seen wearing a white vest, who had recently left prison after serving time for robbery.

After telling him to quit crime -- "your mother deserves better than that" -- the 40-year-old French leader posed for a picture with him and his bare-chested friend, who gave the middle finger to the camera.

Defending the pair, Macron said they had carried a handicapped girl to meet him after the picture was taken.

They were "capable of doing that because I showed confidence in them, because I respected them. That's our republic," he said.

Macron used the trip to France's hurricane-hit islands in the Caribbean to spend time with local people -- and to urge faster reconstruction -- and the picture could help soften his image after a dramatic fall in the polls recently.

But it also highlights his sometimes contradictory image-making, which sometimes casts him as a modernising, youthful president, while at other times shows him emphasising the traditions and sobriety of his office.

He was widely criticised last month after appearing to admonish a 25-year-old gardener who said he was unable to find a job during an open-day at the presidential palace in Paris.

"If I crossed the street I'd find you one," Macron told him.

He was also stern with a shaggy-haired schoolboy in June who addressed him by his nickname "Manu" at a ceremony commemorating the French resistance movement during World War II.

"You call me Mr President, or you call me sir, ok?" Macron told him in front of the television cameras.

Macron said Sunday that he would continue to meet the crowds during his travels, despite political criticism of some of his recent encounters with the public.

Referring to the gardener -- who has since found work as a forklift truck driver -- Macron said he was "right to have told him that ... I regret that sometimes I'm misunderstood but I don't regret saying it.

"Sometimes I get carried away with people because I'm natural with them."

(Except for the headline, this story has not been edited by NDTV staff and is published from a syndicated feed.)
Comments
Emmanuel MacronMiddle Finger photoFrance