Merkel, Europe's de facto leader, told a packed beer hall rally in Munich that the days when her continent could rely on others was "over to a certain extent. This is what I have experienced in the last few days." 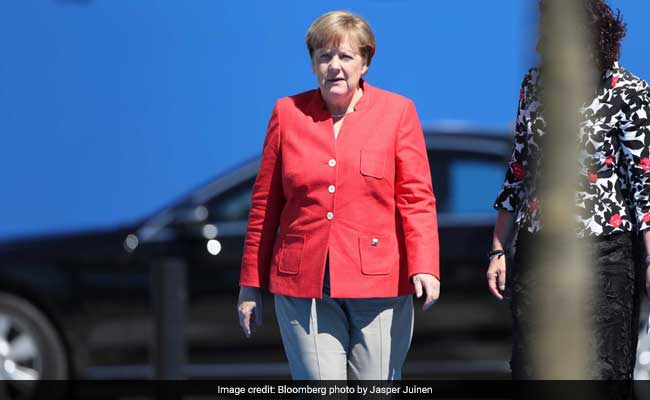 German Chancellor Angela Merkel on Sunday declared a new chapter in U.S.-European relations after contentious meetings with President Trump last week, saying that Europe "really must take our fate into our own hands."

It was the toughest review yet of Trump's trip to Europe, which inflamed tensions rather than healing them after the U.S. president sparred with the leaders of Washington's closest and oldest allies on trade, defense and climate change.

Merkel, Europe's de facto leader, told a packed beer hall rally in Munich that the days when her continent could rely on others was "over to a certain extent. This is what I have experienced in the last few days."

The comments came as Europe watches Britain preparing to leave the European Union and now faces antagonism from Washington.

It was an unusually stark declaration from the normally cautious head of Europe's most powerful economy, and a grim take on the transatlantic ties that have underpinned Western security in the generations since World War II. Although relations between Washington and Europe have been strained at times since 1945, before Trump there has rarely been such a strong feeling from European leaders that they must turn away from Washington and prepare to face the world alone.

The German leader received a minute-long ovation for her comments, which came as she seeks to whip up voter support ahead of September elections. Although her message was partly aimed at her own electorate , it was a measure of how badly relations have deteriorated with Trump's United States that hitting Washington now wins votes while working with it could be perilous.

The remarks were a clear repudiation of Trump's troubled few days with European leaders, even as Merkel held back from mentioning the U.S. president by name. On Thursday, Trump had harsh words for German trade behind closed doors. Hours later, he blasted European leaders at NATO for failing to spend enough on defense, while holding back from offering an unconditional guarantee for European security. Then, at the Group of Seven summit of leaders of major world economies on Friday and Saturday, he refused to endorse the Paris agreement on combating climate change, punting a decision until this week.

Merkel's comments were similar to some she made shortly before Trump's inauguration in January. But they carry extra heft now that Trump is actually in office - and after Trump had a days-long opportunity to reset relations. Instead, by most European accounts he strained them even more.

"The belief in shared values has been shattered by the Trump administration," said Stephan Bierling, an expert on transatlantic relations at Germany's University of Regensburg. "After the inauguration, everyone in Europe was hopeful that Trump would become more moderate and take into account the positions of the G-7 and of NATO. But the opposite has happened. It's as if he is still trying to win a campaign."

Trump - who returned from his nine-day international trip on Saturday - had a different take.

"Just returned from Europe. Trip was a great success for America. Hard work but big results!" Trump wrote on Sunday, reviving a prolific Twitter habit that had slackened during his days on the road.

But many European leaders emerged from their meetings with Trump filled with fresh worry. Trump was far more solicitous toward the autocratic king of Saudi Arabia earlier in the week, telling him and other leaders of Muslim-majority countries - many of them not democratically elected - that he was not "here to lecture." Days later in Brussels he offered a scathing assessment of Washington's closest allies, saying they were being "unfair" to American taxpayers.

The practical consequences of the rift remain uncertain. The United States remains the largest economy in the world, and its military is indispensable for European security, putting a clear limit on Europe's ability to declare independence. American consumers also form an important market for European products - including the German BMWs that Trump complained about in closed-door meetings in Brussels, according to German press accounts.

Nor is Europe united in its approach to Trump: Hungarian Prime Minister Viktor Orban, who has cracked down on critics at home, has embraced the U.S. leader. British Prime Minister Theresa May has also tried to maintain ties - though that's in part because she needs partners as she leads her country out of the European Union.

Even as Merkel positions herself ahead of the election, the message could be the signal of a shift away from the United States, perhaps even one that could outlast Trump's time in office, and that would weaken U.S. global power over the long term. European leaders are developing plans to deepen military cooperation independently of the United States. They are also reaching out to economic partners in Asia that Trump has spurned. All of those shifts will have consequences that extend years, analysts say.

The landslide election in France of President Emmanuel Macron this month has revived hopes for Franco-German cooperation on efforts to bolster European defense initiatives. European leaders want to coordinate their defense purchasing and do more to have standing military capabilities that are deployable outside NATO command structures, where the United States is the dominant force.

Germany hiked its military spending by $2.2 billion this year, to $41 billion, though it remains far from being able to stand on its own militarily.

Merkel and Macron have vowed to work together to further the pro-globalization agenda that Trump stands against.

Merkel's comments were not the only sign Sunday of a Europe determined to hit back. Macron acknowledged that he came prepared for his handshake with Trump, who likes to throw others off balance with a firm yank of the arm. Macron appeared to force Trump to keep shaking hands even after the U.S. leader tried to disengage.

"We must show that we will not make small concessions, even symbolic ones," Macron told France's Journal du Dimanche in remarks published Sunday. He called it "a moment of truth."

(This story has not been edited by NDTV staff and is auto-generated from a syndicated feed.)
Comments
Angela MerkelDonald Trump