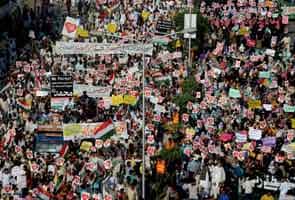 Peshawar: Angry demonstrators set fire to two cinemas in Pakistan's northwestern city of Peshawar on Friday, police and witnesses said, as the country began a day of protests against an anti-Islam film.

One protester was wounded when a cinema guard opened fire as angry crowds armed with clubs and bamboo poles converged on the Firdaus picture house, smashing it up and setting furniture ablaze, police officer Gohar Ali told AFP.

Witnesses said a rampaging crowd stormed the Shama cinema, notorious locally for showing films considered to be pornographic, smashing windows and setting it on fire.

Tens of thousands are expected to take to the streets across the country after the government called an impromptu public holiday to let people protest.

Authorities in Peshawar, the main city in Pakistan's militant-plagued northwest, used shipping containers to block roads leading to the US consulate, the offices of Western aid organisations and other sensitive buildings.

Security elsewhere in the country was tight, with shops and businesses closed and usually busy streets deserted, after calls from all the major political and religious parties for a day of protest.

The authorities shut down the mobile phone network in major cities across the country in an effort to avoid violence.

"We have received orders from the authorities to suspend the service today. The service will remain suspended from 7am to 6pm. It is being done for the security of the people," a senior official at a major mobile phone company told AFP.

Prime Minister Raja Pervez Ashraf urged people to vent their fury peacefully over the "Innocence of Muslims" film, which has triggered angry demonstrations around the world.

But there was more violence in Rawalpindi, twin city of Islamabad, as around 150 demonstrators on the main road to the capital pelted cars and police with stones and burned down a booth at a toll plaza, police official Mohammad Munir said.

Promoted
Listen to the latest songs, only on JioSaavn.com
There have been dozens of protests against the film across Pakistan in the past week, and two people have died, but violence erupted in Islamabad for the first time on Thursday.