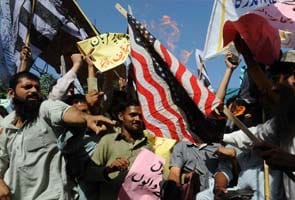 Islamabad: A mob of hundreds of Muslim men attacked and burnt an 82-year-old church and an adjoining school in northwest Pakistan during a protest against an anti-Islam film, sparking concerns among the minority Christian community.

The mob broke through the gate of the St Paul's Lutheran Church inside the cantonment in Mardan city, 48 kms from the Khyber-Pakhtunkhwa capital of Peshawar, on Friday while returning from a rally against the film 'Innocence Of Muslims'.

According to reports from Christians in Mardan, the mob attacked and set on fire the church, St Paul's high school, a library, a computer laboratory and houses of four clergymen, including Bishop Peter Majeed.

The mob also damaged and torched vehicles, including a car and three motorcycles.

Zeeshan Chand, the 17-year-old son of a pastor, was beaten by the mob and had to be hospitalised in Mardan. Rev Binyameen Barkat, the treasurer of the Northern Diocese of the Church of Pakistan, said, "We were under threats of such attacks since last week and had requested the local administration to provide security to the church property, which they did. However, it was not enough to stop the aggressive armed men".

Christian leaders said those who attacked the church had brought kerosene and guns.

They stoned the church, desecrated the altar, tore copies of the Bible and prayer books and later put everything on fire.

"We immediately called the fire brigades, but the mob stoned and did not allow the fire fighters to enter the church compound," Mr Barkat said.

The incident has caused considerable concern in the minority Christian community in Pakistan's restive northwest.

Bishop Majeed said the church was targeted twice in 2010 during protests though the damage at that time was not extensive.

President Asif Ali Zardari today condemned the burning of the church, saying the ransacking of public and private property, particularly places of worship of other religions, was an "un-Islamic and highly condemnable act".

Mr Zardari noted that the "highly provocative anti-Islam film" had been condemned across the world by Muslims and non-Muslims alike.

However, the ransacking and vandalising of places of worship in retaliation for the film "amounted to playing into the hands" of those who produced the anti-Islam movie.

Mr Zardari called on the Khyber-Pakhtunkhwa government to take all measures to protect the places of worship of Christians and other minorities and to address their grievances.

The St Paul's Lutheran Church was built in 1930 and is situated on three kanals of land.

Mardan, the hometown of provincial Chief Minister Amir Haider Khan Hoti, has some 5,000 Christian families that moved to the region in 1903.

Many Christians work for the local municipality and a majority of them live in the Mardan cantonment.
The Christians of Mardan demanded the reconstruction of the church during a protest yesterday.

The protestors said they too are Pakistanis and condemned all acts against Islam like the sacrilegious film.

However, they said they expected the same treatment from their "Muslim brothers".

Promoted
Listen to the latest songs, only on JioSaavn.com
Friday's nationwide protests against the anti-Islam film resulted in 23 deaths and the destruction of property worth billions of rupees.

The government had declared a national holiday to facilitate protests but the situation got out of control as mobs went on the rampage in cities across the country.