The faux seal was on the screen for at least 80 seconds, in plain sight but largely ignored as hundreds in the room at the Washington Marriott Marquis trained their attention on Trump. 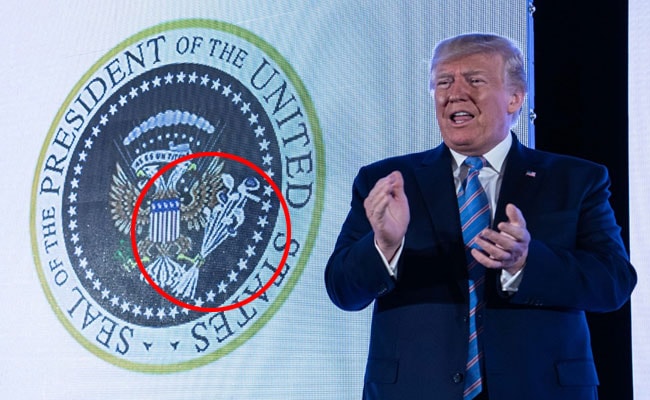 Donald Trump's GOP was no longer his party. So he created a mock presidential seal to prove his point.

Charles Leazott hadn't thought about the seal in months.

The 46-year-old graphic designer threw it together after the 2016 presidential election - it was one part joke, one part catharsis. He used to be a proud Republican. He voted for George W. Bush twice.

But Donald Trump's GOP was no longer his party. So he created a mock presidential seal to prove his point.

He substituted the arrows in the eagle's claw for a set of golf clubs - a nod to the new president's favorite pastime. In the other set of talons, he swapped the olive branch for a wad of cash and replaced the United States' Latin motto with a Spanish insult. Then, his coup de grace: a two-headed imperial bird lifted straight from the Russian coat of arms, an homage to the president's checkered history with the adversarial country.

"This is the most petty piece of art I have ever created," the Richmond, Virginia, resident said in an interview with The Washington Post.

The seal wasn't meant for a wide audience. But then, years later, it wound up stretched across a screen behind an unwitting President Trump as he spoke to a conference packed with hundreds of his young supporters.

That was Tuesday. On Wednesday, The Post was the first to report that the seal was fake - and that neither the White House, nor Turning Point USA, the organizers of the star-studded Teen Student Action Summit, knew how it got there or where it came from. Leazott woke up Thursday and saw the news in a Reddit post as he drank his morning coffee. Then, a torrent of messages.

"It's been chaos," he said. "This is not what I expected when I woke up today."

No one expected it. A Turning Point spokesman said Wednesday that the conservative group wasn't aware of the phony seal until The Post called him. He spent that night trying track down the culprit and determine whether it was an intentional act by a rogue staffer, or just an honest mistake.

The faux seal was on the screen for at least 80 seconds, in plain sight but largely ignored as hundreds in the room at the Washington Marriott Marquis trained their attention on Trump.

But the modified symbol was loaded with jabs at the president - subtle and overt. The Russian eagle, an allusion to accusations that he embraced the Kremlin, and the Spanish script, a reference to Trump's controversial border policies and his denigration of Latin American immigrants. Instead of E pluribus unum - "out of many, one" - Leazott wrote "45 es un títere," or "45 is a puppet," a callback to a viral exchange between Trump and Hillary Clinton in a 2016 debate.

"I'm a graphic designer, it's just something I tossed together," he said. "This was just a goofy thing for some people I knew. I had no idea it would blow up like this."

By Thursday morning, the Turning Point spokesman said the group had identified the staffer responsible for turning Leazott's design into a trending topic. He called the incident a last-minute oversight, the result of a quick online search to find a second high-resolution photo of the presidential seal to place behind Trump. He said the mistake was "unacceptable."

"We did let the individual go," the spokesman said. "I don't think it was malicious intent, but nevertheless."

Leazott doesn't buy it. He thinks whoever was responsible had to know exactly what they were looking for. He believes the person dug up the image he created and used it intentionally.

"That's a load of crap," he said in response to Turning Point's explanation. "You have to look for this. There's no way this was an accident is all I'm saying."

After the Post story published, Internet sleuths went looking, too. They found the image's origin, tracing it back to an online marketplace Leazott set up to sell shirts and stickers sporting the seal, along with other jokey "resistance" apparel. And the citizens of the Web wanted to buy his stuff.

In one fell news cycle, Leazott began making money and fielding calls from papers and TV stations from across the country. People wanted to support him. But the trolls came, too.

"Holy crap at the amount of vile, hateful Facebook messages," he said. "It's apparently a personal affront to some people."

But, Leazott said, it's him who gets the last laugh. A photo of Trump in front of his seal is now his computer background, and the person who used it at the event is "either wildly incompetent or the best troll ever - either way, I love them."

As of Thursday afternoon, Leazott's shirts were sold out. He said he had to start working with a fulfillment center just to meet the demand. He also revived the primary website for his brand, OneTermDonnie, which includes a paean to the American Civil Liberties Union, where the site says 10 percent of all sales will be directed.

"It's cool people are buying this, that's great and all," he said. "But I've got to be honest, I am so tickled in the most petty way possible that the president of the United States, who I despise, stood up and gave a talk in front of this graphic. Whoever put that up is my absolute hero."