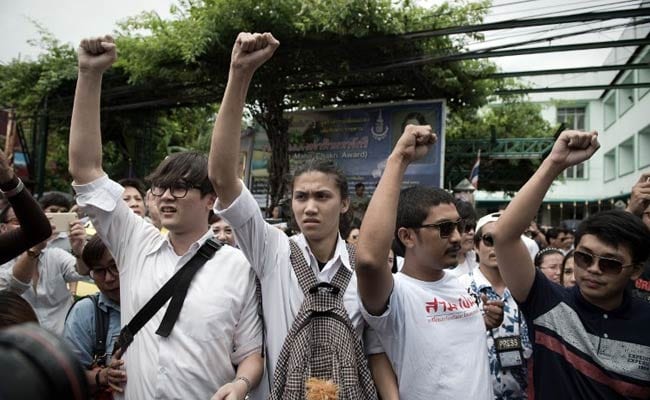 In this file photo taken on June 24, 2015, supporters of anti-coup activists demonstrate outside a police station in Bangkok against the alleged maltreatment of protestors detained in May 2015. (AFP)

Bangkok: The European Union has hit out at Thailand's junta for pursuing sedition charges against a group of anti-coup student activists, describing their arrest and prosecution in a military court as a 'disturbing development'.

The fourteen detained students are part of a small network of pro-democracy campaigners who have dared to publicly challenge Thailand's military rulers after they seized power from an elected government last year and imposed severe curbs on civil liberties.

They were detained on Friday after holding a protest at Bangkok's Democracy Monument the previous day and charged with sedition, a national security offense that carries up to seven years in jail.

Their case is being handled by a military court which usually holds hearings behind closed doors and to which there is no right of appeal once convicted.

"The arrests of 14 students on the basis of charges brought against them for peacefully demonstrating... is a disturbing development," the EU said in a statement released on Tuesday.

"Respect for human rights and fundamental freedoms must be upheld, and military courts should not be used to try civilians," the statement added.

The students can be held by police for up to 84 days in pre-trial detention, although their incarceration must be renewed every 12 days by a court with the next hearing at Bangkok's military court expected on 8 July.

Sirikan Charoensiri, one of a team of lawyers representing the students, said the students were refusing to request bail in protest at being tried in a military court.

"They reject the military court's jurisdiction," she told AFP, adding they have remained "in good spirits" since their arrest.

"It's really quite serious to charge peaceful protesters with sedition. Their activities were entirely peaceful," she added.

Rights groups have described the arrests as a serious escalation in repression by the junta.

Charles Santiago, a Malaysian lawmaker and the chairman of the ASEAN Parliamentarians for Human Rights, described the arrests as a 'disgrace'.

"There's no legitimacy left for a regime that bullies and arrests peaceful students for doing nothing more than standing up for their rights," he said in a recent statement.

Thailand's generals claim the May 2014 coup was essential to restore order after months of often violent protests against the elected government of Yingluck Shinawatra.

But opponents say it was the latest manoeuvre by Bangkok-based royalist elites, backed by large swathes of the military, to scupper democracy and protect their interests.

The coup was the latest crisis in the country's bitterly divided politics that roughly pits the capital's elites against working-class voters in the northern provinces who are loyal to ousted premiers Thaksin and Yingluck Shinawatra.