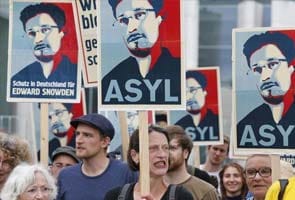 Moscow: A tabloid says Vladimir Putin is Russia's most eligible bachelor, but the president may have competition from an American half his age: Edward Snowden, the former US spy agency contractor believed to be holed up at a Moscow airport.

30-year-old Snowden has received a marriage proposal of sorts in a tweet allegedly from Anna Chapman, the glamorous redhead who was one of 10 Russian agents arrested in the United States and deported in a Cold war-style spy swap in 2010.

"Snowden, will you marry me?!" a posting on a Twitter account bearing Chapman's name and photograph said late on Wednesday.

After a few hours with no reply, a second tweet appeared.

"@nsa, will you look after our children?" it said, a wry reference, perhaps, to the surveillance powers of the US National Security Agency.

31-year-old Chapman did not immediately respond to an emailed query about the authenticity of the tweets and the proposal to Snowden, who is wanted by Washington on espionage charges.

Former NSA contractor Snowden is believed to have been living in a transit area in the Moscow airport since arriving on June 23. He has appealed to various countries for asylum.

Promoted
Listen to the latest songs, only on JioSaavn.com
Putin, 60, who praised Chapman and the other Russian agents deported from the United States, has separated from his wife, prompting the weekly Secrets of the Stars to speculate on his eligibility, under the headline: "Any woman would marry Putin!"