Donald Trump, Who Accused China Of 'Raping' US, Writes Its President A Letter 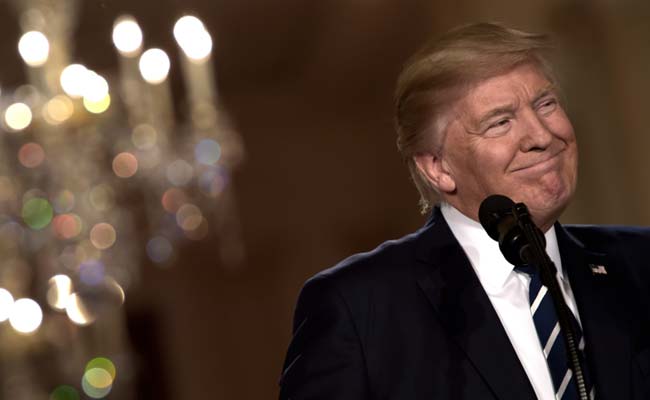 Beijing: The letter wishing China a "prosperous year of the Rooster" came 11 days after China celebrated its Lunar New Year's festival. President Trump has yet to speak to Xi Jinping since his inauguration, even though he has spoken directly or met at least 18 other world leaders.

But he is now in contact, and promising a "constructive relationship" between the world's two most powerful nations.

The White House issued a statement saying Trump had "provided a letter" to Xi on Wednesday, thanking the Chinese leader for a congratulatory note he had sent on the U.S. president's inauguration.

Trump wished the Chinese people a "happy Lantern Festival and prosperous Year of the Rooster," and said "he looks forward to working with President Xi to develop a constructive relationship that benefits both the United States and China," according to the statement.

That's pretty standard diplomatic language, but it was something of a change from the rhetoric Trump employed on the campaign trail and on Twitter, when describing China as an "enemy" of the United States and accused it of "raping" his country through unfair trade practices.

For the record, China celebrated its Lunar New Year on Jan. 28, and the lack of a customary New Year's greeting at that time had been noticed here. (President Barack Obama had sent best wishes on Chinese New Year's Day for at least his last three years in office).

But Trump was at least getting in early for the Lantern Festival, which will be celebrated on Saturday, Feb. 11.

In the last few days, the new U.S. administration appears to have taken a slightly less confrontational approach toward China, and some experts have been expecting a call between the two leaders soon, especially after National Security Adviser Michael Flynn spoke by telephone last week with China's top diplomat, Yang Jiechi.

China's Foreign Ministry said it "highly commends" Trump for the letter, but declined to comment on whether there were plans for a phone call.

"High-level interactions between China and the United States play an irreplaceable role in developing the bilateral relationship," spokesman Lu Kang told a regular news conference. "Since the inauguration of President Trump, the two sides have been maintaining close interactions with each other."

Trump may be taking his time to call Xi, but Lu said there was "no need for me to comment" on suggestions that this represented a snub.

And although Trump may have been late to wish China a Happy New Year, the important festival was not ignored by his family.

Trump's daughter, Ivanka, who is popular among many young people here, attended a Chinese New Year reception with her daughter Arabella at the Chinese embassy in Washington on Feb. 1, while her husband Jared Kushner has also held behind-the-scenes talks with Ambassador Cui Tiankai, according to Bloomberg.

Meanwhile, Defense Secretary Jim Mattis also calmed nerves here somewhat last week when he talked in Tokyo about the need for a diplomatic rather than military solution to the dispute in the South China Sea, where China has built artificial islands in contested waters.

China's Foreign Ministry welcomed those comments this week, while the official English-language China Daily called them a "mind-soothing pill" that "dispersed the clouds of war" that many feared had been gathering over the South China Sea.

And though China objected when Mattis also expressed his strong support for Japan and pledged to press ahead with the deployment of a missile defense system for South Korea that, perhaps, was only to be expected. "His style and positions reflected continuity from the Obama administration, and the kind of approach the Chinese have become comfortable dealing with over the last eight years," said Paul Haenle, director of the Carnegie-Tsinghua Center in Beijing.

But Trump's focus on China's large trade surplus with the United States and his view of trade as a competitive, zero-sum game, may still spell tough times ahead in the relationship.

Trump and Xi have spoken at least once by telephone, days after his election victory, when they "established a clear sense of mutual respect," according to Trump's transition team. At the time, Trump also reportedly said he believed the two leaders "will have one of the strongest relationships for both countries moving forward."

But Trump did cause huge consternation here when he also accepted a phone call from Taiwan's President Tsai Ing-wen, whose administration is not recognized by China - or, indeed, granted diplomatic recognition by the United States under the one-China policy.

And the fact that Trump has yet to talk to Xi since his inauguration has raised some eyebrows.

"The Chinese have noticed they have had relatively less engagement with the new administration than others in the region, and are still trying to determine who they can work with among the new faces in Washington," said Haenle. "It's a slow start on the China relationship, and that combined with some of President Trump's statements since his election has made the Chinese uncomfortable. ... What China is really looking for is the first substantive interaction."

Wang Yiwei, a Sino-U. S. relations expert at Renmin University of China in Beijing, said it would be wrong to interpret the belated Chinese New Year greeting as a snub to China, especially because Trump has only just been sworn in and has had a lot on other pressing issues on his plate.

"He knows that China is very important, perhaps so important that he isn't sure how to interact with China yet. He needs time to think it over," he said.

The letter, he added, is also "an attempt to calm the concerns - some people were tense and thought Sino-U. S. relationship was in trouble. To deal with the problems, they (Trump and Xi) will need to talk them over in a phone call. But that needs time for preparation."

The nationalist Global Times, whose views do not represent government policy, called the letter a "goodwill gesture." Although the previous lack of contact between the two leaders had been "noted by public opinion," the belated New Year's greeting had "satisfied people's expectations," it added in an editorial.

In a separate analysis piece, it quoted experts as saying the letter was a good signal, but that China still needed to evaluate Trump's actions.

"He sent a letter rather than made a phone call, so Trump may still want to keep his distance from China, but a friendly signal is better than a provocation," the paper quoted Chu Yin, an associate professor at the University of International Relations, as saying.

Promoted
Listen to the latest songs, only on JioSaavn.com
Not all of Trump's phone calls to world leaders have gone well, with the U.S. president reportedly yelling at Australia's leader, expressing hostility towards Mexico's and ranting about China and NATO to the French president. In the end, China might reflect, a straightforward letter is not all that bad.

J&J Vaccine Gets Additional Warning On Bleeding Side Effect