The summit will put Trump face to face with leaders he has antagonized on a range of issues, including the environment and the U.S. withdrawal last month from the international nuclear accord with Iran. 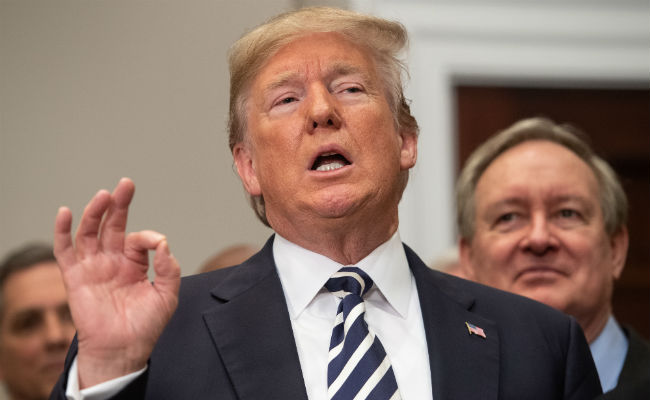 Trump has said new tariffs are necessary because US reliance on imports poses a national security threat.

Washington: President Donald Trump plans to confront other world leaders at a summit in Quebec on Friday over what he believes is a global economic system tilted against the United States, several people briefed on the plan said, escalating tensions with U.S. allies who have expressed outrage at his pivot toward protectionism.

The summit will put Trump face to face with leaders he has antagonized on a variety of issues, including the environment and the U.S. withdrawal last month from the international nuclear accord with Iran.

But the two-day meeting of the Group of Seven, which will bring together many of the world's leading economies in a picturesque Canadian mountain town, has crystallized into a showdown over trade after Trump's recent insistence on new barriers that the other nations see as petty and insulting. Most of the other countries represented have a trade beef with Trump that is unlikely to be resolved at the summit - and for each the standoff is one more sign that the United States is pulling back from traditional global leadership roles.

"The good news for him is the Mexicans won't be there, so that is one less country that he has to deal with" over trade complaints, said William Reinsch, a trade specialist at the Center for Strategic and International Studies. "The others are all mad at him."

Trump's top economic adviser characterized the tensions over trade as a "family quarrel," telling reporters Wednesday that Trump is untroubled by the rancor.

"There are disagreements. He's sticking to his guns, and he's going to talk, talk to them," White House National Economic Council director Larry Kudlow said. "Talk is the best remedy here."

Trump sees himself as a free-trader and a reformer, Kudlow said, and is inviting other nations to work with him to remake a "broken" global trade system. He insisted that the United States is not inviting a trade war.

Trump will meet with Canadian Prime Minister Justin Trudeau and French President Emmanuel Macron on the sidelines of the meeting, Kudlow said. The White House announced no individual meetings between Trump and either British Prime Minister Theresa May or German Chancellor Angela Merkel.

In a sign that Trump is looking to stoke divisions, White House officials are discussing ways to impose additional economic penalties against Canada - the host nation for the summit - in retaliation for Ottawa's threat to levy tariffs on roughly $13 billion in U.S.-made products. Among Canada's targets: orange juice, soy sauce, sleeping bags and inflatable boats.

But there are divergent views within the White House over how to treat Canada, with Treasury Secretary Steven Mnuchin urging both sides to de-escalate, two people close to the discussions said.

White House officials are also considering whether to have Trump refuse to sign on to a customary joint agreement at the end of the G-7 summit, one senior administration official said, as a signal that the old ways of doing business are over.

The president personally lobbied Senate Foreign Relations Committee Chairman Bob Corker, R-Tenn., on Wednesday to back down on his bill that would put new restrictions on the White House's ability to impose tariffs. But Corker told Trump he would not pull his bill, which has growing support on Capitol Hill. Instead, he plans to push ahead, potentially weakening Trump's hand heading into the G-7 meetings with the divisions among Republicans over trade now fully on display.

Trump's decision to impose tariffs on steel and aluminum imports against Canada, Mexico and members of the European Union last week enraged numerous world leaders, who believed they would be exempt based on months of negotiations with the administration.

A meeting among G-7 finance ministers last weekend ended in rancor, with economic officials from the other six members issuing a rebuke of Washington. Unable to agree on a joint statement about the agenda ahead of this week's summit, those economic deputies instead asked Mnuchin to relay to Trump their "unanimous concern and disappointment" over tariffs.

The two-day meeting in Quebec will be the first opportunity for many heads of state to challenge the U.S. leader in person since the imposition on metals imports.

"The outrage, I imagine, is real outrage, but I don't think Trump is going to blink because of their outrage," said Dan DiMicco, a trade adviser to Trump during the presidential campaign who also played a key role during the transition. "He is going to stand his ground because he knows what he's doing is right."

Trump has said his new tariffs are necessary because American reliance on imports poses a national security threat to the United States. Along with the United States, the G-7 countries include Canada, Italy, France, Germany, Japan and the United Kingdom - all of which would face the new penalties.

"The idea that we are somehow a national security threat to the United States is, quite frankly, insulting and unacceptable," Trudeau said Sunday on NBC. He added that Canada would impose retaliatory tariffs against American-made goods.

Britain, a close military ally of the United States, is also affronted at Trump's national security claim. British trade officials have noted that a British steelmaker was selected two years ago to provide components for the next generation of U.S. Navy submarines.

May complained to Trump in a phone call Monday that U.S. tariffs on European steel and aluminum imports are "unjustified and deeply disappointing," her office said.

Mexico and the European Union have also said they plan to retaliate, with Mexico targeting products such as apples, grapes and cranberries, while European leaders are looking at penalties on a range of items, including bourbon and tobacco.

But Trump has remained undeterred, focusing on imposing even more restrictions on imports unless other countries agree to make it easier for U.S. producers to sell products overseas. In an effort to strengthen his hand, Trump has ordered Commerce Secretary Wilbur Ross to launch an investigation into auto imports to determine whether they pose a national security risk, a move that could give him more flexibility to penalize Mexico, Germany and Japan.

Trump has threatened these sorts of tactics for more than a year, but he has frequently deferred any decision. That all changed earlier this year, however, when he adopted a much more adversarial position on trade following the departure of key advisers who had tried to restrain his impulses.

A number of foreign leaders scheduled to attend the G-7 summit have invested a lot of time trying to dissuade Trump from implementing the "America First" approach he championed during the 2016 campaign.

Trudeau and a number of his top advisers held frequent meetings with top U.S. officials, governors and lawmakers, seeking to reinforce the long-standing economic and national security ties between the two countries. Trudeau even sat beside Trump's daughter Ivanka during a Broadway musical last year about how a Canadian town sheltered stranded American airline passengers following the Sept. 11, 2001, terrorist attacks.

Trump had what a European diplomat called a "very disagreeable" telephone conversation with Macron last week, in which Macron tried to leverage a personal bond with Trump to suggest that the tariffs are unfair. The call ended with no movement from Trump, the diplomat said. The two leaders last met at a lavish state visit in Washington in April.

"This administration likes to threaten, and then they often don't follow through on the threats," said Jamie Fly, senior fellow and director of the Future of Geopolitics and Asia programs at the German Marshall Fund. "In this case, now they have followed through, at least for now . . . . We're entering new territory with these trade actions here. There really is long-term damage being done to the relationships."

Perhaps no country appears as scorned as Canada, which Trump has turned his anger toward increasingly in recent months, accusing the northern neighbor of imposing unfair trade restrictions on products such as dairy and beef imports.

Trudeau said last week that he was prepared to fly to Washington to complete what he believed were the final steps of North American Free Trade Agreement renegotiation, but he was informed by Vice President Mike Pence not to come unless he agreed to include a provision that would make the pact expire after five years. After that exchange, the trip was canceled.

Ever since, Trump has displayed open hostility toward Canada and Trudeau in public statements and social media posts. These broadsides have led to an angry response from Trudeau, who has tried to convince the White House that there was a way to renegotiate the NAFTA that would result in a "win, win, win," for the United States, Canada and Mexico. But those efforts faltered last week. Now, the three North American nations are threatening to ratchet up penalties on each other.

"I think the government of Canada has very artfully turned the other cheek for multiple months, and I think they've just gotten to the point of saying, 'That isn't working, and so we have to show our spine as opposed to our cheek,' " said Gordon Giffin, who served as U.S. ambassador to Canada during the Clinton administration.

Kudlow on Tuesday said Trump wanted to pursue an entirely new approach to NAFTA that would include the United States negotiating individually with Mexico and Canada, breaking up the three-party talks.

On Wednesday, he shrugged slightly when asked about the fate of NATFA talks, noting the discussions are continuing.

Trump's willingness to battle with U.S. allies on trade agreements follows a number of other decisions he has made during his first 16 months in office to either scale back or withdraw the United States from international agreements put in place by his predecessors.

In one of his first acts as president, he announced that the United States would withdraw from the Trans-Pacific Partnership, a trade deal with 12 Pacific Rim nations that the Obama administration had hoped would isolate China. In June 2017, Trump took steps to pull out of the Paris climate change agreement. Last month, he announced he was withdrawing from a multination deal aimed at preventing Iran from developing nuclear weapons.

This week's summit will be Trump's first meeting with the three big European powers that helped forge the Iran deal - Britain, France and Germany - since he pulled out of the nuclear agreement. Those nations and others that have expanded trade with Iran since the deal was struck in 2015 and could now face U.S. sanctions.