Donald Trump took executive action unsatisfied with the funding in a bill passed by Congress. 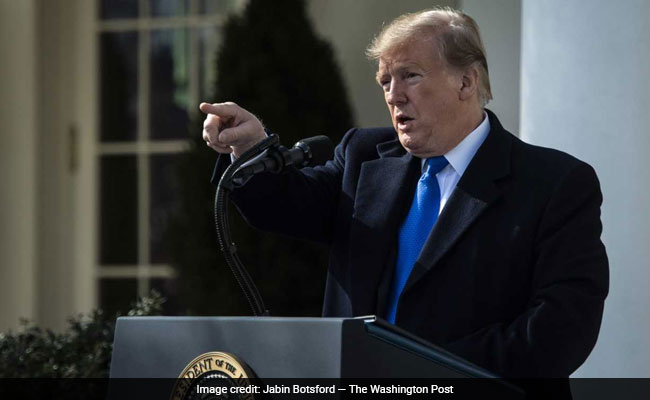 Donald Trump has been steadfast in his demand for a wall along the border with Mexico.

President Donald Trump on Friday declared the southern border of the United States to be a national emergency, catapulting the country into uncertain legal and political battles as he seeks to fulfill a campaign promise that eluded him for two years.

He made the designation in an attempt to redirect taxpayer money from other accounts and use it to erect more than 230 miles of barriers along the U.S.-Mexico border. But Trump anticipates a flurry of legal challenges that will eventually be decided by the Supreme Court. Democrats are trying to paint the action as evidence of a rogue president who has finally gone too far and vowed to stop him.

Trump's announcement capped a frenetic two-month period that included the longest government shutdown in U.S. history at 35 days, the reemergence of Democrats as a political force, and a Republican Party caught between taking signals from Trump and bucking his unconventional impulses. It also begins a new phase of his presidency that will test the separation of powers, as he sidesteps Congress despite Republicans urging restraint.

During a meandering 50-minute Rose Garden news conference, Trump offered little empirical evidence to back up his assertion that there was a crisis on the border requiring an extraordinary response. Instead, he invoked hyperbolic, campaign-style rhetoric about lawlessness that he said only walls could suitably address.

"We're talking about an invasion of our country with drugs, with human traffickers, with all types of criminals and gangs," he said. He used the word "invasion" seven times.

He later said the emergency declaration wasn't urgent, but rather expedient, as it would help him build a wall more quickly than Congress would allow.

"I didn't need to do this, but I'd rather do it much faster," he said.

Democrats and the American Civil Liberties Union mapped out the ways they would try to block Trump's wall before it was completed. House Judiciary Committee Chairman Jerrold Nadler, D-N.Y., said he would summon White House counsel Pat Cipollone to Capitol Hill to explain the White House's rationale.

California Attorney General Xavier Becerra, a Democrat, said he planned to work with other states to take legal action against the White House. The ACLU said it was preparing a lawsuit of its own, arguing Trump cannot legally redirect taxpayer money during an "emergency" unless it's for military construction projects that support the armed forces.

Democrats and several Republicans predicted a two-pronged response to the declaration: One, having Congress vote to reject it in the coming weeks, and two, suing Trump - or at least aiding other parties who attempt to intervene.

"The president's actions clearly violate the Congress' exclusive power of the purse, which our Founders enshrined in the Constitution," House Speaker Nancy Pelosi, D-Calif., and Senate Minority Leader Chuck Schumer, D-N.Y., said in a joint statement. "The Congress will defend our constitutional authorities in the Congress, in the Courts, and in the public, using every remedy available."

Most notably, Pelosi and Schumer said, "We call upon our Republican colleagues to join us to defend the Constitution."

Republicans are divided over Trump's declaration, with many unnerved over what they see as an executive power grab while others are unwilling to challenge the president ahead of 2020 presidential and congressional elections.

Sen. Thom Tillis, R-N.C., who faces reelection next year, suggested it would be hypocritical for Republicans to support an emergency declaration after criticizing former President Barack Obama for "executive overreach" and suggested future Democratic presidents might follow Trump's precedent.

"I don't believe in situational principles," he said.

Other Republicans lodged an even more straightforward objection: Declaring a national emergency might prompt Trump to shift funds from other desperately needed projects.

"Doing so would have detrimental consequences for our troops," he said in a Thursday statement. "And it would undercut one of the most significant accomplishments of the last two years - beginning to repair and rebuild our military. I hope that the president will pursue other options."

The issue was more than a constitutional discussion for Republicans. Democrats have signaled they would proceed with a privileged resolution of disapproval that would force GOP lawmakers to either vote for Trump's wall or oppose his emergency claim - with certain political repercussions.

By Friday afternoon, Rep. Joaquin Castro, D-Texas, had 60 co-sponsors for the resolution.

Such a measure would pass in the Democratic-controlled House, and more than enough Republicans could break ranks to ensure its Senate passage. But Trump is certain to veto the resolution, and Congress is unlikely to muster enough votes to override a veto.

Democratic legislative staff huddled on Capitol Hill at 2 p.m. Friday, shortly after the White House issued their proclamation. According to a senior Democratic aide, no decisions have been made on how Congress would proceed with a formal measure of disapproval, but both House and Senate leaders are expected to move carefully to win over as many Republicans as possible.

The more serious threat to Trump's move could be litigation, with numerous parties exploring legal challenges - including Democratic House leaders who have been examining various options for months.

Sen. John Cornyn, R-Texas, said Thursday that he did not consider an emergency declaration to be "a practical solution" for Trump because litigation could keep any potential wall funding on hold for months or years while the lawsuits resolve themselves.

"I thought there were other, better alternatives," he said.

White House officials want to rush to approve projects and reallocate money as quickly as possible, but no timeline has been given.

Part of their strategy is to try to use "eminent domain" to seize private property along the border, particularly in Texas, where they want to install parts of the barrier. This is expected to open another round of legal challenges from private landowners.

Other parts of the approach are equally unclear. White House officials have not said, for example, how they plan to solicit bids on the projects or what type of process they will follow. Congressional Democrats and some state leaders, meanwhile, have vowed to try to stop the work before it can even begin.

Trump has long asserted that the United States is full of rapists, murderers, and other violent criminals who enter illegally from Mexico, and he has vowed to address it by building a wall. Government data, though, show that attempted border crossings remain near 40-year lows and that drug traffickers primarily attempt to smuggle hard narcotics through ports of entry, not through empty gaps as Trump has suggested.

The biggest challenge on the border in recent years has been a surge of families seeking to cross into the U.S. and claim asylum, overwhelming border agents and U.S. facilities.

White House officials plan to use $8 billion to build new fencing that they believe will block or discourage a wide range of immigrants.

Of that money, $1.375 billion was approved by Congress on Thursday, and it can be used for 55 miles of "pedestrian fencing" in the Rio Grande Valley in Texas.

The White House plans to use another $600 million from the Treasury Department's forfeiture funds account, which is money that is seized by the federal government from a range of illicit activities.

An additional $2.5 billion would be redirected from a Pentagon program for countering drug activities, and a final $3.6 billion would be moved from military construction accounts. It's that final pot of money that White House officials said required the national emergency declaration, as the White House is generally barred from moving money from one account to another without congressional approval.

Trump promised during the 2016 campaign to build a border wall and have Mexico finance it. Since becoming president, he has insisted instead that the money come from U.S. taxpayers.

White House officials said more than 50 national emergencies have been declared since the 1970s, attempting to rebut concerns that Trump was stepping outside his authority in taking this step.

"This is authority given to the president in law already," said acting White House chief of staff Mick Mulvaney. "It's not as if he just didn't get what he wanted so he's waving a magic wand and taking a bunch of money."

But some presidential historians said Trump's move was unusual, in part because he stopped short of describing how his steps would ameliorate a situation that he hasn't precisely defined. White House officials on Friday wouldn't even disclose where the new border barriers would be placed.

Presidents have taken extraordinary steps before, at times invoking a crisis facing the United States. President Lincoln suspended the writ of habeas corpus during the Civil War in 1861, making it easier to arrest someone without bringing the individual before a judge.

President Truman tried to nationalize the steel industry in the 1950s amid tensions brought by the Korean War, and was rebuked by the Supreme Court.

Presidential scholars said Trump's move on Friday, though extreme in its rhetoric, will be viewed much differently even if he attempts to use the National Emergencies Act of 1976 to buttress his case. That's because Trump isn't responding to a crisis that's evident to the American people, but instead taking action after Congress rejected his funding request for two years.

"It shrinks the importance of Congress even more," said Douglas Brinkley, a presidential historian. "It is a wild-eyed imperial presidency."

In his Rose Garden remarks, Trump suggested that he had already thought through the legal minefield that his decision was likely to traverse. He predicted that lower court judges and Ninth Circuit appeals court judges would likely rule against him before the administration ultimately prevails.

As part of the national emergency declaration, Trump signed a $333 billion spending bill that funds many government operations through September. This averted a government shutdown that would have begun Saturday.

(Except for the headline, this story has not been edited by NDTV staff and is published from a syndicated feed.)
Comments
Border wallUS-Mexico border wallDonald Trump