Along with his wife Melania, the US leader boarded a helicopter to fly to Colleville-sur-Mer where he and French leader Emmanuel Macron will commemorate fallen US servicemen in the invasion. 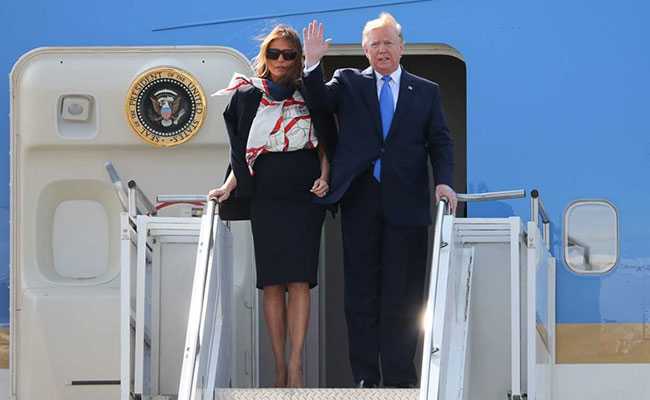 Trump arrived in France for ceremonies to mark the 75th anniversary of D-Day landings by Allied troops.

US President Donald Trump arrived in northern France on Thursday for a second day of ceremonies to mark the 75th anniversary of the D-Day landings by Allied troops.

"Heading over to Normandy to celebrate some of the bravest that ever lived. We are eternally grateful!" he tweeted before taking his flight to the airport of Caen in the Normandy region.

Along with his wife Melania, the US leader boarded a helicopter to fly to Colleville-sur-Mer where he and French leader Emmanuel Macron will commemorate fallen US servicemen in the invasion.

Earlier in the morning, Trump had tweeted reported comments from Fox News host Sean Hannity which referred to "glowing reviews from the British media" of his trip to the UK for a three-day state visit.

He contrasted this with "hateful coverage" by TV network MSNBC which is regularly critical of the US leader.

Trump had joined Queen Elizabeth II and other leaders on Wednesday for a first day of commemorations in Portsmouth, southern England.

The president tweeted on Wednesday that he "could not have been treated more warmly in the United Kingdom by the royal family or the people".

He left Britain for Ireland on Wednesday where he met Prime Minister Leo Varadkar at Shannon Airport for talks.

(Except for the headline, this story has not been edited by NDTV staff and is published from a syndicated feed.)
Comments
NormandyDonald TrumpD-day anniversary