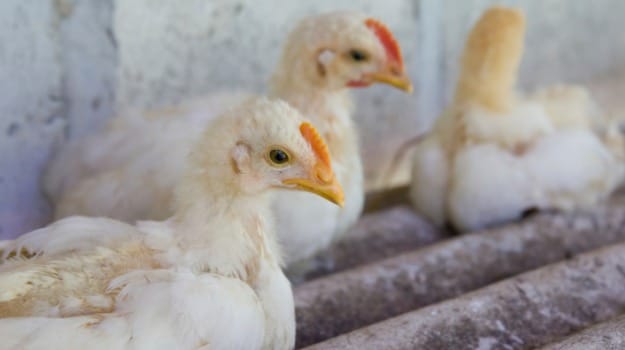 Baldwin: Amish chicken farmer Ura Gingerich begins each day by lantern light, but his simple life of tradition is threatened by a modern scourge that has devastated the US poultry industry.

More than 48 million turkeys and chickens have either died by the bird flu virus or been killed to stop its spread since it emerged on the west coast in December and swept across the nation.

Egg prices have doubled as farmers work to rebuild their flocks in 20 states, prompting some restaurants to take the breakfast favorite off their menus.

Meanwhile, a handful of countries have banned US poultry imports and rural life has changed as farmers implement strict biosecurity measures and state fairs cut back on exhibits.

While it's been more than a month since the last case was detected, Gingerich and other farmers worry the outbreak could return with autumn's cooler temperatures and the migrating water fowl that spread the virus.

"We're just hoping God protects us from getting it," Gingerich told AFP.

Unlike most US poultry farmers, the Amish won't accept financial aid from the government and don't use insurance programs that would help compensate for the loss of their flock.

Gingerich, 58, and his wife Mary support 16 children by raising around 12,000 chickens and selling vegetables and flowers from their farm in Baldwin, Wisconsin. He is an elder in a group of 32 Amish families in the area.

The best way to protect a flock is to keep them away from wild birds and to make sure people don't carry the virus into the barn on their clothes, shoes or equipment like cages.

In hardest-hit Iowa, farmers use disposable plastic booties and coveralls and even hose off trucks before allowing them onto their land to make sure the virus doesn't come in on mud stuck in the tires.

Gingerich and his neighbors relied upon the owner of a nearby live chicken market to tell them when the flu struck nearby.

Lam Duong sells 850,000 chickens a year from what's believed to be one of the biggest live bird market in the United States.

His Concord Poultry in South St Paul, Minnesota primarily serves the region's large immigrant community of Hmong, a people from the highlands of South East Asia.

He has contracts with 35 Amish farmers in Iowa and Wisconsin who breed chickens which are mostly black to resemble the types of birds sold in Asia.

Duong jumped in his car when he heard on the evening news that the virus had been detected in a turkey flock in northern Wisconsin's Chippewa County, only 25 miles (40 kilometers) from Gingerich's community.

"It took me all night, but I had to warn all the farmers," Duong said, explaining how he'd toured suppliers without telephones. "I have 35 farms, and we didn't get the bird flu."

Because the Amish don't have electricity, they can't use electric fans in coops, so they have windows every five feet. Duong asked them to put mesh over the open windows to keep out wild birds and keep the barn doors closed so the chickens don't go outside.

"If they go to church, they have to change their clothes when they get home before they go to the chicken barn, and then change their boots again at the barn," Duong said.

"Even a relative cannot go from farm to farm."

He used to load up to 4,500 chickens from a couple of farms at a time. Now, Duong picks up one flock, drives it to his business, disinfects his truck, then goes back for another flock. He also stops two miles from each farm, gets out, and sprays his truck tires and mud flaps with disinfectant in case he may have picked up germs while driving.

When chicks are delivered from the hatcheries, the truck driver now stays in the truck to prevent spreading undetected bird flu from farm to farm.

Gingerich used to let private customers into his barn to select their own chickens. Many of those customers were Hmong and would go from farm to farm, trying to find just the right chickens, but also potentially tracking germs from one barn to the next.

Now he's given up completely on private sales.

"We got a buck apiece more but we didn't want to take the risk because there's a chance of bringing in the bird flu," Gingerich said during a pause in his chores.

"The Hmong weren't happy about it, but we said we have to protect our farms."