Despite Trump's 'Mission Accomplished', Question Raised Over US Syria Strategy

A chorus of voices across the American political spectrum expressed support for Trump's latest strikes, but criticized the lack of a broader US Syria strategy that could end the seven-year war - with or without Assad. 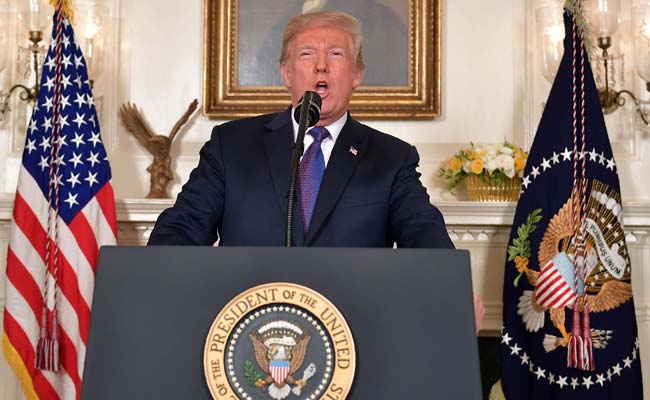 Donald Trump declared victory on Saturday in the largest application of military force he has ordered.

Washington: Just over a year ago US President Donald Trump ordered a missile strike against the Syrian government for a chemical weapons attack against its own people.

Trump did the same on Friday, with allies France and Britain, in a response intended to deter Syrian President Bashar al-Assad from using chemical weapons again, but which was unlikely to change his grip on power.

On Saturday, Trump declared: "Mission accomplished," a phrase indelibly associated with President George W. Bush, who used it in 2003 during the Iraq war and which dogged him for the rest of his presidency.

A chorus of voices across the American political spectrum expressed support for Trump's latest strikes, but criticized the lack of a broader US Syria strategy that could end the seven-year war - with or without Assad.

Commentators questioned the message behind the latest strike - which signaled that Western allies would not let a chemical weapons attack go without punishment - but demurred about deeper involvement when barrel bombs by the Assad government kill far greater numbers of Syrians.

"To succeed in the long run, we need a comprehensive strategy for Syria and the entire region," Republican Senator John McCain said in a statement after the latest strikes.

"Air strikes disconnected from a broader strategy may be necessary, but they alone will not achieve U.S. objectives in the Middle East," said McCain, who a year ago called for more aggressive action that would cripple Assad's military.

Trump has made clear he wants to withdraw the roughly 2,000 U.S. troops in Syria involved in the anti-Islamic State campaign, and his administration has suspended support for Syrian rebels, evidence of his desire to disengage from Syria.

But he appeared to conflict that message when he said on Saturday that Western allies were prepared to "sustain this response" if Assad does not stop using prohibited chemical weapons.

A US.official said that while top aides such as Defense Secretary Jim Mattis had persuaded Trump to avoid the tougher action the president initially wanted, arguing that that would have risked escalation with Assad ally Russia, the administration is no closer to crafting a comprehensive strategy on the war in Syria.

The official, speaking on condition of anonymity, said Trump wanted to do heavier damage to Assad's war machine but ultimately settled on degrading his chemical weapons capability in part because he was reminded that part of his domestic political base was opposed to the United States getting dragged deeper into the Syria quagmire.

"It's a tough contradiction for him to sort out,"  the official said.

While the chemical weapons attack has put Syria fully on Trump's radar, experts say it's unlikely to persuade him to stay the course in Syria beyond defeating Islamic State.

Several U.S. officials, speaking on condition of anonymity, said it was not a priority for the administration to push out Assad, who has survived with massive aid from Iran and Russia.

"There is no answer to the Assad problem just yet," said Firas Maksad, director of the Washington-based Arabia Foundation. "Assad has succeeded, at least for the foreseeable future, and he is capitalizing on that."

While there appears to be no immediate alternative to the so-called Geneva Process that would lead to a political transition in Syria, several senior U.S. officials, speaking on condition of anonymity, insisted it has failed and it was time to rethink.

"The Geneva Process hasn't worked and it's time to find something new or change it," said one U.S. official.

Dennis Ross, who served as top Middle East adviser to President Barack Obama in his first term, said the missile strikes would have little effect on the overall situation in Syria.

Trump's approach, he said, "is not about the balance of power in Syria. It is about ISIS and deterring Assad's use of chemical weapons.

"The strikes may convince (Russian President Vladimir) Putin to stop further use (of chemical weapons) by Assad as it remains clear we are pulling out of Syria. The strikes don't alter that reality," Ross said.

Promoted
Listen to the latest songs, only on JioSaavn.com
"Putin has the political will and the endurance to stay the course in Syria and he has demonstrated that for almost three years," Maksad said.
© Thomson Reuters 2018