Curiosity rover may be littering plastic on Mars 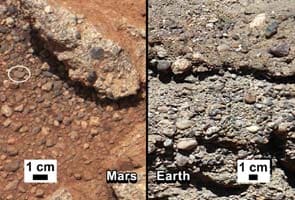 London: NASA's Curiosity rover on Mars is apparently littering on the Red planet. Pictures beamed back by the rover show a bright object lying in the Martian dirt, and a closer look suggests the object is a piece of plastic wrapper that has fallen from the robot.

The discovery has put a twist on the rover's current mission to scrub out its soil scoop and take its first sample of Martian dirt for analysis, the 'New Scientist' reported.

However, more bright specks of unidentified matter in the soil - at first thought to be from Curiosity shedding - may actually be Martian in origin, although what they are is a mystery.

Curiosity had been in the midst of preparing to feed soil into its Chemistry and Mineralogy (CheMin) instrument, which bounces thin beams of X-rays off a sample to read its mineral composition.

This involved taking scoopfuls of soil, shaking them vigorously and then dumping them back out, to be sure that any lingering traces of earthly particles didn't make it into the science equipment.

After the first scoop-and-shake revealed the unexpected object, Curiosity took a quick break to examine the find. It then got back on course, taking a second scoop of soil on October 12.

But the hole Curiosity dug also contained bright particles, forcing the team to dump the load due to worries that the rover was picking up pieces of its own robotic debris.

Further scrutiny now suggests that at least some of the unidentified particles are in fact native to Mars.

Images show light-toned particles embedded in clumps of excavated soil, implying that they couldn't have been shed by the rover.

Promoted
Listen to the latest songs, only on JioSaavn.com
NASA is currently preparing to take a third sample from the site as well as more pictures, which should help them figure out whether the bright bits are unwelcome litter or something worthy of delivery to the rover's on-board lab equipment.