President Donald Trump took a decidedly different approach on Friday when he welcomed a North Korean official to the White House for the first such meeting in 18 years. 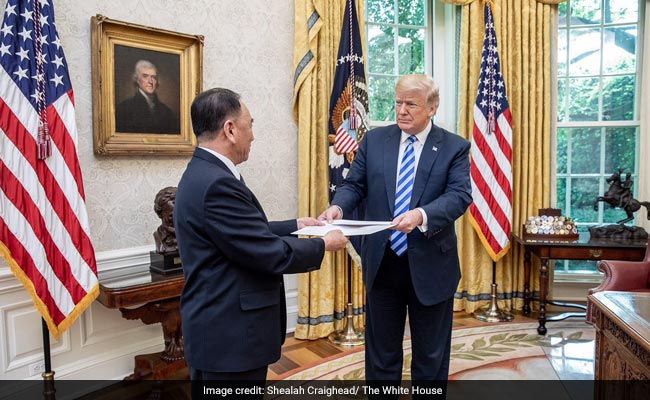 Washignton: When former president Bill Clinton traveled to North Korea in 2009 on a humanitarian mission to free two American journalists, he delivered strict instructions to his team ahead of their meeting with dictator Kim Jong Il: "We're not smiling."

In several photos, including a formal portrait with their hosts in Pyongyang, Clinton and his aides kept their game faces on - looking serious and determined, befitting the tone of the mission, according to a person familiar with the trip.

President Donald Trump took a decidedly different approach on Friday when he welcomed a North Korean official to the White House for the first such meeting in 18 years. Trump beamed as Kim Yong Chol - a former spy chief accused of masterminding the sinking of a South Korean navy vessel in 2010 that killed 46 sailors - presented him with a cartoonishly oversize envelope containing a letter from Kim Jong Un, the nation's current dictator.

The two posed for a photo in the Oval Office with Trump proudly showing off the envelope - an image that White House aides promptly distributed to the public. 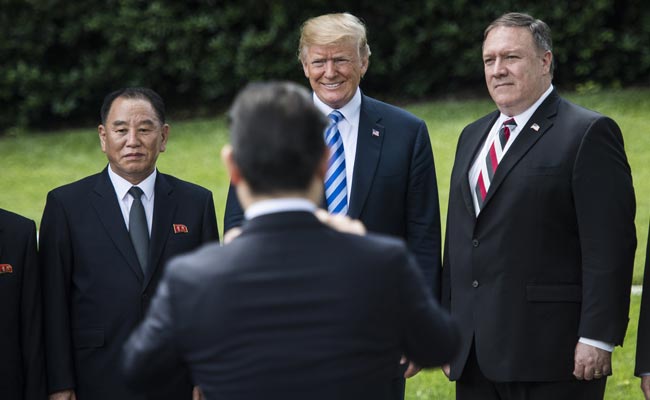 The warm display left some former U.S. officials who've negotiated with NorthKorea arguing that Trump had already handed Pyongyang another public relations victory before winning concessions on its nuclear program.

"No question this is speed dating," said Christopher Hill, a former State Department diplomat who led the U.S. delegation in the Six-Party Talks with NorthKorea during the George W. Bush administration. He recalled being rebuffed in his bid to personally deliver a letter from Bush to Kim Jong Il - in a standard business-size envelope.

By contrast, Hill said, the North Koreans already "have gotten the whole enchilada" from Trump.

The question of how to engage with a brutal, authoritarian regime has been a challenge for most presidents, but it has taken on heightened sensitivity as Trump prepares to meet Kim Jong Un in Singapore on June 12. No sitting president has ever met with a North Korean leader, and the summit will produce images that ricochet instantly around the globe.

For Trump - an impulsive and demonstrative president whose macho handshakes, scowls and thumbs-up poses are tailor-made for social media memes - the risk over his interactions with Kim go beyond the private talks at the bargaining table, former U.S. officials said.

"Photo ops of the two together, smiling, those are disseminated in North Korea to show the two leaders are equal," said Bill Richardson, the former U.S. ambassador to the United Nations who met with several dictators, including Iraq's Saddam Hussein, and made several trips to Pyongyang. "Trump should avoid the propaganda, the one-on-one smiling and hugging."

Yet Trump views the photos as a victory, too - a symbol that he is willing to discard the diplomatic conventions that have limited his predecessors and stymied their attempts to curb North Korea's nuclear program. White House aides said Trump's sudden decision in March to agree to the summit was made with the confidence that his own negotiating skills would quickly pay greater dividends than three decades of failed lower-level talks.

Time and again, Trump has also upended the more cautious diplomatic approaches of his predecessors in showing warmth toward authoritarian figures.

He treated Chinese President Xi Jinping to "the most beautiful piece of chocolate cake" during a lavish summit at Mar-a-Lago last year. He praised Philippines President Rodrigo Duterte, who has presided over the extrajudicial killings of thousands of suspected drug dealers, for doing an "unbelievable job on the drug problem."

And Trump applauded Russian President Vladimir Putin in March for winning another term even though national security aides warned him in writing, "DO NOT CONGRATULATE," because the election was viewed as heavily manipulated.

"The Trump thesis of international diplomacy is the Trump thesis of New York real estate dealmaking, which is that step one is to establish a personal - individual or family to family - close relationship with your mark," said Daniel Russel, who served as a top Asia policy official in the Obama administration. "You build trust, don't talk business, establish camaraderie and allow the Trump charisma to steep and marinate to soften them up."

White House aides have emphasized that Trump's aim is to keep the door open to working with rival leaders on shared challenges despite their differences. Trump's meeting with Kim Yong Chol was a reciprocal gesture after Kim Jong Un met twice with Secretary of State Mike Pompeo in Pyongyang, the aides said.

It was not the first such meeting in the Oval Office. In October 2000, Clinton welcomed Jo Myong Rok, a top North Korean military official, who also presented Clinton with a letter from Kim Jong Il. But Clinton ultimately rejected Kim's invitation to a summit in Pyongyang.

Trump critics call his approach to foreign policy inconsistent and naive, handing his rivals unintended victories by allowing his instincts to undermine his own administration's strategy. On Friday, Trump said that, in the spirit of the diplomatic talks, he would no longer use the phrase "maximum pressure" to describe the administration's policy of economic sanctions and diplomatic isolation - even as his aides have vowed to keep the pressure on.

Historian Robert Dallek said presidents traditionally have been mindful of the optics when meeting authoritarian leaders. He pointed to President Dwight Eisenhower's aides cautioning him not to smile for photos during a meeting with Soviet Union officials after Joseph Stalin's death.

"They were very mindful of not wanting to appear to friendly and maybe taken into camp by the Soviet leaders," Dallek said. "In terms of domestic politics, it's a dangerous game if you seem to be too cozy with someone who has been your adversary."

With Trump, he added, "there's a feeling that he is so inexperienced and lacking in understanding of what he's dealing with. Certainly, he knows he's dealing with a dictatorial regime, but he seems to be so driven by his own desire for kudos and celebration of his own achievements."

In 2016, President Barack Obama visited Havana as part of his administration's restoration of diplomatic relations with Cuba after more than half a century. At the end of a joint news conference, Cuban leader Raul Castro attempted to raise Obama's arm in triumph, but Obama let his arm go limp.

An Obama aide told reporters that he had sought to deny Castro an "iconic photo" because the two sides still had significant disagreements.

For years, Trump and other Republicans had criticized Obama for cozying up to dictators and looking feckless and weak on the world stage. But after meeting with Kim Yong Chol for more than 90 minutes, Trump said the two did not discuss human rights - even though the Kim family regime has imprisoned tens of thousands of North Koreans in hard-labor camps and abducted American, Japanese and South Korean citizens.

"I don't do any more penance to these Republicans," said Hill, the former diplomat who was second-guessed during his negotiations with North Korea. "I did my best, held to a pretty hard line, but these guys complained we were appeasing North Korea. Where are they now?"