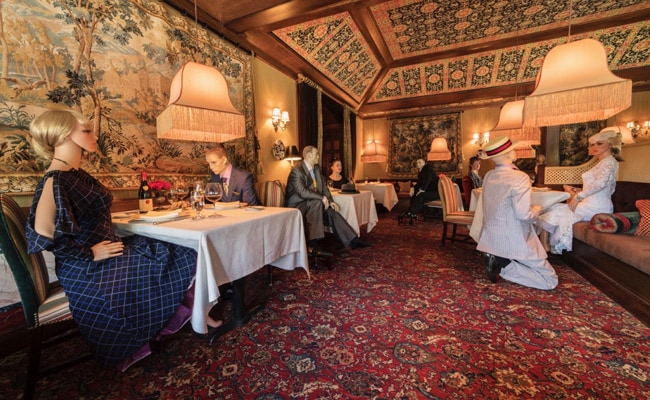 The Inn collaborated with local businesses to provide staging, costumes and make-up for mannequins.

Their eyes are vacant, their smiles uncanny -- but they're dressed to the nines and they don't need a reservation for some of America's finest dining.

"When we needed to solve the problem of social distancing and reducing our restaurant's occupancy by half, the solution seemed obvious -- fill it with interestingly dressed dummies," says chef Patrick O'Connell, owner of The Inn at Little Washington, in an e-mail to AFP.

"This would allow plenty of space between real guests and elicit a few smiles and provide some fun photo ops," he adds.

The Inn, which says it is "known for being reverently irreverent" and which also happens to be the only restaurant with three Michelin stars in the Washington, DC area, is scheduled to reopen May 29.

The theatrical, life-sized mannequins are dressed to evoke the post-war ambience of the 1940s, with pearl necklaces, checkered dresses and striped suits.

The glamor needs to suit the rest of the Inn, whose sprawling grounds are distinguished by features such as a chicken coop complete with crystal chandelier, and where a tasting menu can cost each guest $248 before wine.

The Inn has collaborated with local businesses to provide the staging, costumes and make-up for the mannequins, strategically placed at tables which must remain empty.

"We're all craving to gather and see other people right now. They don't all necessarily need to be real people," O'Connell mischievously points out.

"I've always had a thing for mannequins -- they never complain about anything and you can have lots of fun dressing them up," he adds.

Unlike the real guests.