Christchurch Shooting: Portions of the ghastly attack at the downtown mosque were broadcast live on social media by a man who police confirmed had also released a manifesto railing against Muslims and immigrants 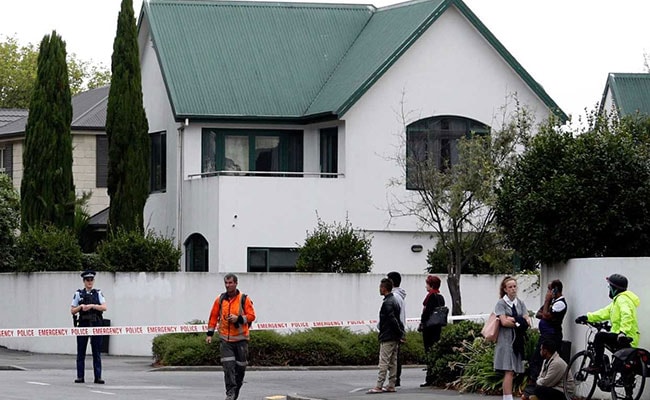 Christchurch Shooting: Three people were believed to have been involved in the violence. (AFP photo)

Forty-nine people are dead and scores more are seriously injured after a heavily armed gunman clad in military-style gear opened fire during prayers at a mosque in the center of Christchurch, New Zealand, on Friday. A second mosque was also targeted in what Prime Minister Jacinda Ardern called a well-planned "terrorist attack" making for "one of New Zealand's darkest days."

Authorities said they had four people in custody - three men and one women - but later clarified that only three were believed to have been involved in the violence. One man in his late 20s, whom the authorities declined to name, was charged with murder and was expected to appear in court on Saturday morning. The suspects had not been on security watch lists, officials said.

Police had also deactivated an improvised explosive device, and were working to disarm a second, that had been attached to a vehicle used by the suspects. Counterterrorism forces were activated across New Zealand and Australia, as New Zealand elevated its national security threat level to "high" for the first time.

New Zealand Police Commissioner Mike Bush said 41 people had been killed at Al Noor mosque on Deans Road, opposite a large downtown park. Seven more were fatally shot about three miles away at a mosque in Linwood, an inner suburb of Christchurch, and another person died at the hospital. 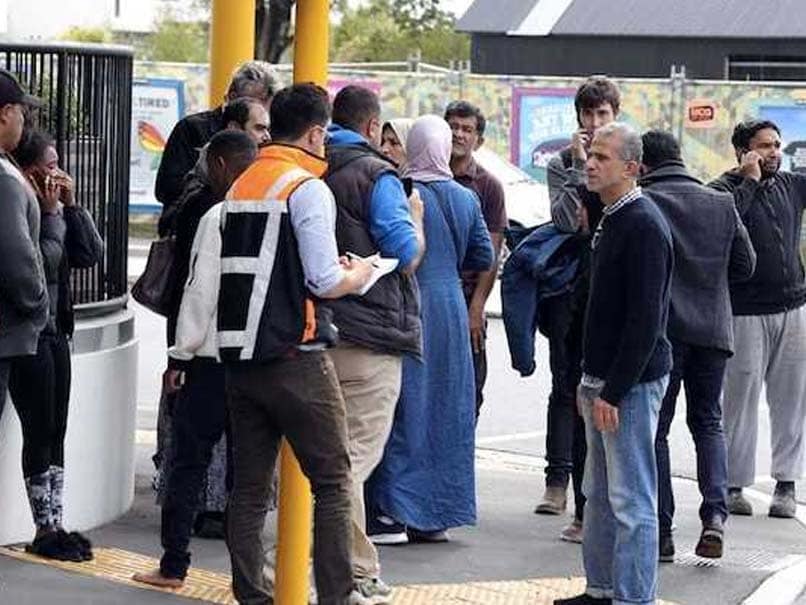 Christchurch shooting: Police advised residents of the city to stay off the streets. (AFP photo)

Health officials said 48 patients, including both young children and adults, were being treated for gunshot wounds at Christchurch Hospital, while additional victims were seeking medical treatment elsewhere. Around 200 family members were at the hospital awaiting news about loved ones.

Portions of the ghastly attack at the downtown mosque were broadcast live on social media by a man who police confirmed had also released a manifesto railing against Muslims and immigrants. The 74-page document states that he was following the example of notorious right-wing extremists, including Dylann Roof, who murdered nine black churchgoers in Charleston, South Carolina, in 2015. The document, littered with conspiracy theories about white birth rates and "white genocide," is the latest sign that a lethal vision of white nationalism has spread internationally. Its title, "The Great Replacement," echoes the rallying cry of, among others, the torch-bearing protesters who marched in Charlottesville, Virginia, in 2017.

Meanwhile, the digital platforms apparently enlisted by the suspects highlights a distinctly 21st-century dimension of mass gun violence - one sure to put more pressure on social media companies already under scrutiny about how they police their services.

Schools and public buildings, as well as the Christchurch Hospital, were on lockdown for hours on Friday afternoon as the police commissioner advised residents of Christchurch, the largest city on the South Island, to stay off the streets.

Bush appealed to Muslims nationwide, asking them to stay away from mosques while the security risk remained grave.

"I want to ask anyone that was thinking of going to a mosque anywhere in New Zealand today not to go, to close your doors until you hear from us again," he said at a news conference.

The prime minister said New Zealand had suffered "an extraordinary and unprecedented act of violence," lamenting in particular that a target had been placed on the country's migrant population. "Many of those who will have been directly affected by this shooting may be migrants to New Zealand. They may even be refugees here. They have chosen to make New Zealand their home, and it is their home."

"They are us," Ardern intoned.

The "extremist views" that she said had motivated the alleged attackers, "have absolutely no place in New Zealand, and, in fact, have no place in the world."

She said the suspects had chosen New Zealand "because we represent diversity, kindness, compassion, a home for those who share our values." Addressing the suspects directly, she said, "You may have chosen us. But we utterly reject and condemn you."

Before the attack, someone with apparently advance knowledge of unfolding events posted links on Twitter and the message board 8chan to the 74-page manifesto, as well as to a Facebook page where the individual promised that the attack would be streamed live. The Twitter posts included images of weapons and ammunition, as well as the names of perpetrators of past mass-casualty shootings.

In the manifesto, the purported shooter identified himself as a 28-year-old white man born in Australia. He described his motivation, which he said involved defending "our lands" from "invaders" and ensuring "a future for white children." He aimed to "directly reduce immigration rates," he said, explaining that he chose to target New Zealand to illustrate that there was nowhere "left to go that was safe and free from mass immigration."

The 17-minute video, apparently filmed from a helmet camera, captured the man's drive to the mosque. Once there, he pulled a weapon from the trunk of the car and walked a short distance to the entrance, where he began to shoot. In the final minutes of the video, he can be seen spraying bullets through the corridors and into the rooms of the house of worship.

Twitter said it had suspended the account where the links had first appeared and was "proactively working to remove the video content from the service," according to a spokesperson. Facebook "quickly removed both the shooter's Facebook and Instagram accounts and the video" as soon as the social media company was alerted by police, a spokeswoman, Mia Garlick, said in a statement. "We're also removing any praise or support for the crime and the shooter or shooters as soon as we're aware."

Further afield, Felix Kjellberg, a YouTube celebrity from Sweden who goes by "PewDiePie" and flirts openly with Nazi symbolism, distanced himself from the violence after the man who live-streamed his rampage asked viewers to "subscribe to PewDiePie."

The author of the manifesto also said he intended to deepen strife in the United States over gun ownership and the Second Amendment.

Gun laws in New Zealand are more stringent than American regulations, but not as strict as those in Australia and much of Europe. In 2017, more than 1.2 million guns were held by civilians, according to a tracking website maintained by the University of Sydney School of Public Health.

New restrictions came into effect, including on military style semiautomatic weapons, after what had previously been deadliest shooting in New Zealand's modern history. In 1990, 13 people were killed in the seaside town of Aramoana when a resident, David Gray, went on a shooting spree after an argument with a neighbor. 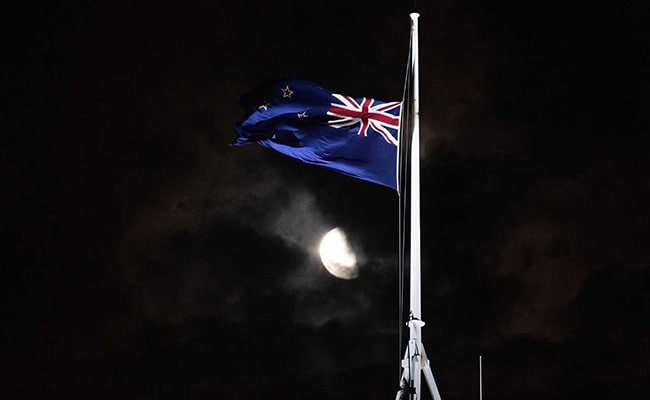 Violent crime is rare in New Zealand, compared to the rest of the world. The country's murder rate fell to a 40-year low of 35 in 2017, police said, seven deaths for every 1 million people.

The sense of tranquility reflected in those figures was replaced by mayhem and desperation, as residents appeared on local television pleading for information about family members who had been at the targeted mosques during Friday prayers.

Recalling the scene inside the downtown mosque, where several hundred had been present for afternoon prayer, an eyewitness told Radio New Zealand, "There was blood everywhere." Others described to local television how they heard fellow worshipers crying out for help and saw bullet shells strewn across the floor.

Video on social media of the attack's aftermath showed a state of disbelief, as mosque-goers huddled around the injured and dead. Amid anguished cries, a person can be heard saying "there is no God but God," the beginning of the Muslim profession of faith.

Ikhlaq Kashkari, president of the New Zealand Muslim Association, thanked police and urged "all New Zealanders to stay calm and united," according to local media.

Jill Keats, 66, told Newshub she was on her way to lunch when she heard noises that she thought at first were firecrackers. Then, she saw victims come streaming out of the mosque, some of whom she helped find medical aide. "I never thought in my life I would see something like this," she said. "Not in New Zealand." 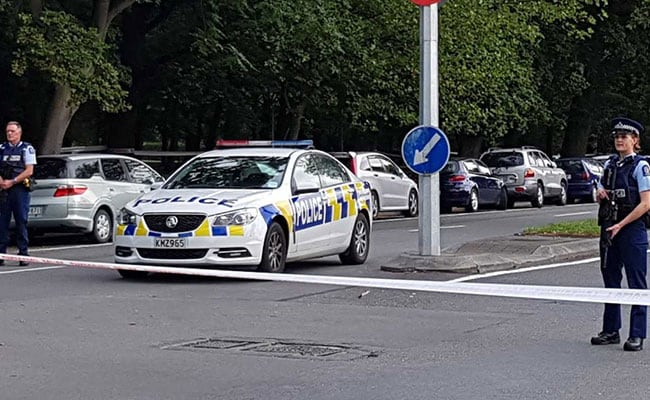 Police appealed to Muslims nationwide, asking them to stay away from mosques while the security risk remained grave. (AFP photo)

Among those inside the mosque in downtown Christchurch were members of Bangladesh's national cricket team, according to a Bangladeshi journalist, Mohammad Isam. The ESPNcricinfo correspondent posted a video on Twitter of the cricket players hurrying through nearby Hagley Park as sirens wailed in the background.

The mayor of Christchurch, Lianne Dalziel, addressed residents in a Facebook video on Friday, asking them to remain calm. "It looks as though the worst has happened," she said.

Government ministers voiced shock and outrage. Deputy Prime Minister Winston Peters, speaking on Checkpoint, said the country had been robbed of its "innocence," while Andrew Little, the justice minister, affirmed, "There is no place for hate in New Zealand."

Officials in Australia, including Prime Minister Scott Morrison, expressed solidarity. Morrison, speaking to reporters Friday evening, confirmed that one of the individuals taken into custody was an Australian-born citizen. Morrison called the suspect "an extremist, right-wing, violent terrorist."

Marise Payne, Australia's minister for foreign affairs, said, "Targeting people in a place of worship is abhorrent and an affront to all."

World leaders joined in condemning the attack and expressing support for New Zealand. British Prime Minister Theresa May offered her condolences, and the mayor of London, Sadiq Khan, said he would increase security at London mosques. Security was stepped up in other European counties as well.

European Council President Donald Tusk predicted that the attack would not "diminish the tolerance and decency that New Zealand is famous for," and sad, "Our thoughts in Europe are with the victims and their families."

Officials in Muslim-majority countries deplored the violence visited on the mosques.

Turkish President Recep Tayyip Erdogan addressed a message "to the Islamic world and the people of New Zealand, who have been targeted by this deplorable act," which he described as "the latest example of rising racism and Islamophobia." Anwar Gargash, minister of state for foreign affairs in the United Arab Emirates wrote on Twitter that "our collective work against violence & hate must continue with renewed vigor." A statement from Saudi Arabia said the kingdom condemned "terrorism in all its forms and manifestations."

(Except for the headline, this story has not been edited by NDTV staff and is published from a syndicated feed.)
Comments
Christchurch shootingchristchurch Mosque Attack