A Chinese tourist boat went down in heavy seas off Thailand. 12 bodies are off for identification. 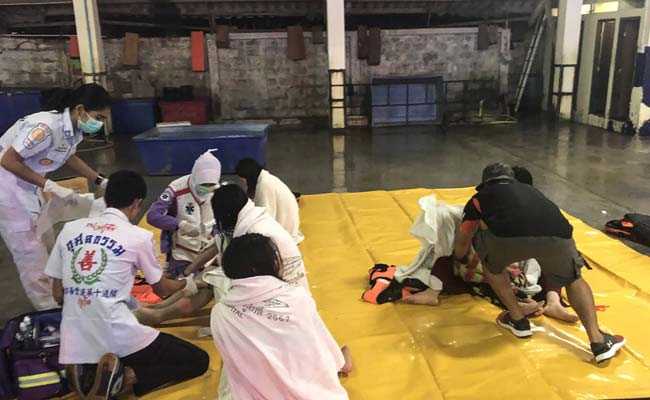 Some 48 people, passengers and crew, were rescued and one body found Thursday.

Thailand's navy pulled 12 bodies from waters off the coast of the holiday island of Phuket on Friday after a tourist boat went down in heavy seas with dozens of Chinese passengers on board.

Five were found drifting face down in the water, still wearing life jackets, several miles from the area where the Phoenix sank after being hit by five-metre (15-foot) high waves in a storm on Thursday evening.

One survivor, a Chinese woman, was rushed to hospital in Phuket, according to an AFP reporter at the scene, after she was also found several miles from the boat, floating near the bodies of fellow passengers. Her condition was unknown.

Forty-three other passengers remain unaccounted for but are believed to have been trapped on the Phoenix, which sank as it was returning from a day trip from Phuket.

"The 12 bodies are on the way to Vachira Phuket Hospital for identification," according to a statement from the Public Health Ministry in Bangkok.

Helicopters scanned the water Friday as divers tried to reach the boat which the Thai navy said had sunk 40 metres below the surface of the Andaman Sea, a few kilometres (miles) off the coast of Koh He, an islet known for its coral formations and popular with day-trippers from Phuket.

The Phoenix was carrying 105 passengers, the majority Chinese tourists, when it hit trouble, sparking a rescue attempt that took place in the dark.

Some 48 people -- passengers and crew -- were rescued and one body found Thursday before the operation was suspended overnight.

Thai junta number two Prawit Wongsuwon ordered an investigation into why "the boat went to sea" despite a weather warning of strong wind.

The Phoenix was among several boats that appeared to have ignored a severe weather warning in place since Wednesday to take tourists on day-trips to the islands that dot the seas off Phuket.

Several other vessels hit trouble late Thursday. Initial reports from officials said all of the passengers on those boats were rescued.

"I assume they are trapped inside the boat... but I wish some of them have survived," Phuket governor Noraphat Plodthong told reporters.

Rear Admiral Charoenphon Khumrasee, deputy commander for Thai Navy in the southern region, said navy divers, frogmen and marine police divers as well as helicopters had been sent to the scene.

Thailand is already in the global spotlight for a dramatic rescue mission in the north of the country, after 12 boys and their football coach were trapped in a cave complex.

Stunned survivors of the boat accident huddled in blankets on a Phuket pier late Thursday.

Some cried while others appeared dazed as they walked around still wearing their life vests.

A Chinese consular official arrived at the operations centre in Phuket to monitor the rescue effort.

Phuket is a magnet for overseas visitors including Western sun-seekers and huge numbers of Chinese tourists who make up the bulk of the 35 million people expected to visit Thailand this year.

Thailand has a poor health and safety record and accidents are common on its roads and busy waterways -- especially in tourist areas during the monsoon season which is now biting.