Shenzhou-14 will be China's third of four crewed missions - and the seventh of a total of 11 missions - needed to complete the space station by the end of the year. 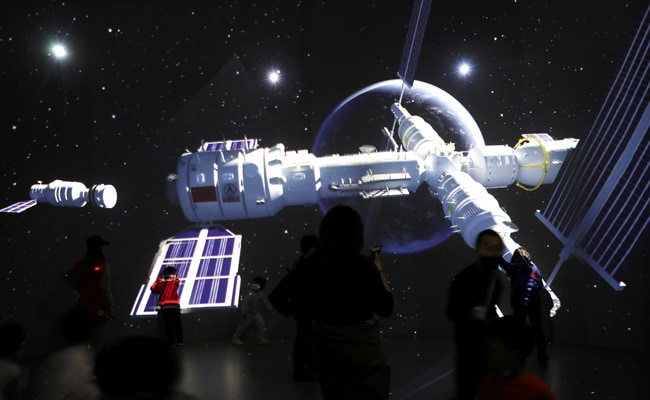 The new Chinese space station will have a designed lifespan of a decade. (File)

China will launch a spacecraft on Sunday carrying three astronauts to the core module of the unfinished Chinese space station, where they will work and live for six months as construction enters advanced stages.

A Long March-2F rocket carrying the Shenzhou-14 spacecraft is set to blast off from Jiuquan Satellite Launch Centre in the northwestern province of Gansu at 10:44 a.m. local time (0244 GMT) on Sunday, a China Manned Space Agency official told a news conference on Saturday.

Mission commander Chen Dong will be accompanied by Liu Yang and Cai Xuzhe aboard Shenzhou, meaning "Divine Vessel" in Chinese.

"All preparations for the launch are basically ready," said Lin Xiqiang, an agency official.

Shenzhou-14 will be the third of four crewed missions - and the seventh of a total of 11 missions - needed to complete the space station by the end of the year.

China began constructing its three-module space station in April 2021 with the launch of Tianhe - the first and biggest of the station's three modules.

Tianhe, slightly larger than a metro bus, will form the living quarters of visiting astronauts once the T-shaped space station is completed.

Following Shenzhou-14, the remaining two modules - the laboratory cabins Wentian and Mengtian - will be launched in July and October, respectively.

Wentian will feature a robotic arm, an airlock cabin for trips outside of the station, and living quarters for an additional three astronauts during crew rotations.

The Shenzhou-14 crew will help with the setup of Wentian and Mengtian and conduct functionality tests on both modules.

The space station will have a designed lifespan of a decade. At 180 tonnes, it will be slightly heavier than Russia's decommissioned Mir, and about 20% of the International Space Station by mass.